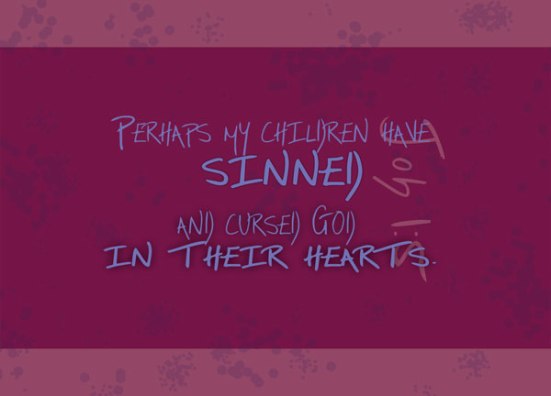 When a period of feasting had run its course, Job would send and have them purified. Early in the morning he would sacrifice a burnt offering for each of them, thinking, “Perhaps my children have sinned and cursed God in their hearts.” This was Job’s regular custom.

The book of Job is an exposition on suffering, really, and perhaps one of the greatest exposition in world literature today. However, we’ll not be looking at the massive topic of suffering today. We’ll be looking at Job – the kind of person he was before the series of tragic events, the kind of character he has that made him described by God as blameless and upright, fearing God and shunning evil – there is no one on earth like him (Job 1:8). I am not a parent, no, I’m not even married. I do not know how a parent feels for his child. But Job’s devoted prayer for his children is what every child would desire.

We are not told much about Job’s children at all. You know how an amazing man will usually NOT produce an amazing son? Job’s another example. Verse 4 says, his sons used to take turns holding feasts in their homes, and they would invite their three sisters to eat and drink with them. There is no mention about the characters of Job’s children, but here a hint is given, they enjoyed merrymaking. Merrymaking was no sin, probably, but note this – When a period of feasting had run its course, Job would send and have them purified (verse 5). Job was an upright man, who would do absolutely nothing that would injure himself in the eyes of God. He was blameless. I’m not exactly sure what ‘send and have them purified’ means in this context, but it sure was extreme. Job didn’t want to take chances. He loved his children, and he didn’t want to take a chance with their lives.

He wasn’t so much that he anticipated his children to sin. I don’t think so. His burnt offerings and intercession to God for his children was based more of an apprehension that they might have sinned, more than an expectation that they must have sinned. “Perhaps my children have sinned and cursed God in their hearts.” He wouldn’t know if they did. He wouldn’t know if they had sinned. And the admirable thing about Job was that he didn’t wait until he had known before he interceded for them. His prayers weren’t based so much of his lack of trust in his children, but more of a deep holy fear of God.

Do you pray for your children regularly? Do you intercede for them before God regularly? It is more often than not the case that the younger ones do not know enough to pray for forgiveness before God regularly. It is the job of the matured to cover the youth in prayer until they learn how to do it themselves. The prayer of a parent for a child is immense. Do not overlook it.