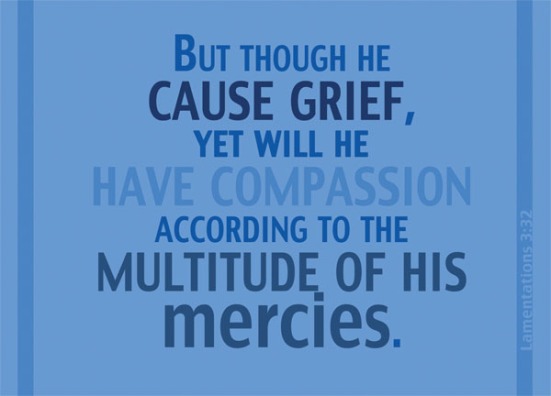 Lamentations is probably a rather unpopular book, no? Written by the major prophet Jeremiah a.k.a. the Weeping Prophet during the times of the destruction of Jerusalem, it is often called a book of mourning – filled with horror stories and graphically tragic tales – it is not a book one would usually enjoy reading. Yet in my limited understanding of this book I’d like to think that we find hope in least expected places – and Lamentations, as much as it is tragic, also brings forth hope – A hope that is, in contrast to the suffering, made stronger.

The entire book of Lamentations, especially the first two chapters, have Jeremiah crying on and on about how God has struck against Jerusalem. We see the extent of the wrath of God, we see the extent of the suffering of the Jews. We see Jeremiah, shocked and hurt, yet knowing that God was justified in His punishment on His people – it was the very thing that Jeremiah had prophesied and warned about in the book of Jeremiah. There are, however, a few characteristics of this grief that we can point out from the book of Lamentations.

This is perhaps what makes Lamentations so different from the book of Job. The suffering of the Jews here was a result of their disobedience to God, whereas Job was blameless and upright. This certainly isn’t the only reason for suffering, but it is undoubtedly a strong reason for one. As much as God is kind and merciful and watches over us, He is just, and in His own godly way, His justice will prevail.

After two and a half chapters of lamenting, Jeremiah says men are not cast off by the Lord forever [Lam 3:31]. The ‘men’ Jeremiah was referring to is not just anybody, but God’s people. He did not mean the unbelievers, but His special people. Grief will not last, especially when it is caused as a result of God’s justice.

3. God is unwilling to cause grief

For he does not willingly bring affliction or grief to the children of men [Lam 3:33]. God is very merciful, and his patience can be stretched very far. But in light of the disobedience of his people, that rubber snaps, and God impose his wrath. Yet he was merciful; he forgave their iniquities and did not destroy them. Time after time he restrained his anger and did not stir up his full wrath [Psalm 78:38]. Even in his anger, he restrains himself. Psalm 78 refers to the disobedience of the Israelites in the wilderness, but throughout the history of Old Testament, it is significant to note that God has again [Isa 48:9] and again [Ezekiel 20:22] held back his full wrath from His beloved people.

This is the one nature of God that everybody likes. And perhaps we all too often take it for granted, and we miss the point. Oh, God will forgive me. Our Lord is merciful. It is easy to spot God’s merciful nature when we have already received deliverance. Yet, when in the midst of suffering, and when we cannot seem to see God, or when we feel that he has turned against us, we often forget that our God is merciful. Again, let us pick out the characteristics of the mercy of God:

2. God’s mercies are often hidden when we are in grief

In times of pain and grief, when we look upon Lamentations, we often fail to spot the hints of mercy. We will pick up that indeed God cause grief and affliction, we tend to be unable to look pass our misery. Indeed, we are unlikely to see His mercy; we are unlike to see hope clearly. Yet we must be aware that God is merciful. Jeremiah watched as his city was destroyed, and yet he was still able to believe that God’s mercy will prevail in the end. Believing in God’s mercy will lead us to hope.

His mercy is everlasting, he is merciful even in his wrath [Habakkuk 3:22]. God’s mercies never fail [Lam 3:22]; his mercies are new everyday [Lam 3:23] and he cannot take away his mercies [Psalm 89:33]. No matter what happens, God will be merciful, for it is in his divine nature.

Thank God for his mercies! Behind the afflictions, there is always a larger, merciful, purpose. Our belief in God’s mercy leads us to hope, and often, we find hope in places we least expect. God is hope, and we can always find hope in Him. Even in His wrath and punishment, he retains his mercy, and we can seek hope in His promises. Even in His wrath and fury, there exists mercy, and there exists His merciful purpose. Jeremiah, even in the midst of his mourning, knew that God is merciful, and has hope in his yet-to-come deliverance. In times of grief, even if we cannot see God, let us cling on to his hand, let us cling on to his words and believe in his merciful nature. As you know, we consider blessed those who have persevered. You have heard of Job’s perseverance and have seen what the Lord finally brought about. The Lord is full of compassion and mercy [James 5:11]. No matter what kind of afflictions you suffer, persevere.

Lamentations is not a book for the faint-hearted. Even after Jeremiah points out hope, he returns to talk about the sins of the people in Chapter 4, and in Chapter 5 speaks intensely to God in a heartfelt prayer. I am weak, and have been utterly exhausted in reading this book. It is harsh, and tells us that life can be harsh, that God can be severe. Perhaps the beauty of this book is that it hides not the harshness of life from us and yet manages to bring out hope. John Piper quotes Marshal Shelley to sum up Lamentations:

“Life is hard, and God is good.”
That’s Lamentations.