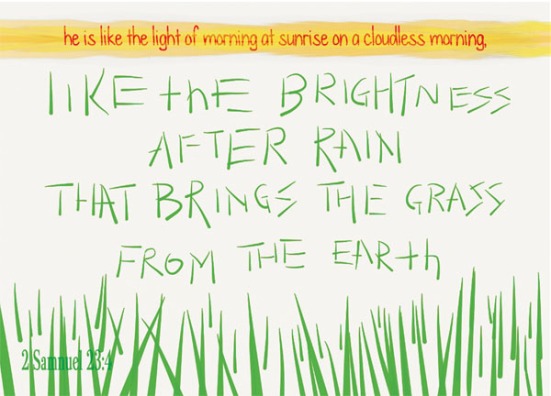 he is like the light of morning at sunrise on a cloudless morning, like the brightness after rain that brings the grass from the earth.

2 Samuel 23 is dedicated to David’s last words – probably not his actual last words, in the form that he spoke these things with his last breath and died immediately after that; but this was likely his last recorded psalm, or perhaps even his last prophetic words. Some versions place the quotation marks signifying the beginning of the psalm at 23:1, yet others place them at 23:2. Regardless, we are introduced to David in verse 1 as David son of Jesse, the man exalted by the Most High, the man anointed by the God of Jacob, Israel’s singer of songs. In a somewhat romantic fashion, David uses a beautiful analogy to illustrate the greatness of the Messiah.

he is like – I’m going to assume that David is prophesying about the Messiah, not just in this verse but in this entire psalm (verses 2-7), which would correspond with the idea that these were David’s last words of prophecy. Although the ‘he’ in the immediate context of the verse refers to the righteous ruler in the preceding verse – When one rules over men in righteousness, when he rules in the fear of God [2 Sam 23:3]. This would again echo the idea of this being a prophecy of the Messiah, because Christ has been described to be a sun of righteousness [Mal 4:2|Article].

the light of morning at sunrise – At which point of the day do you think the sun looks most beautiful? To each be his own, but there’s a reason why people would sit at beaches and mountains and watch the sunrise (or even sunset, for that matter) rather than watching the sun at noon. It’s beautiful. Barely rising, still utterly in between the horizon, rising steadily, with rays of sunlight shooting out in a strong blend of warn colours. it is extremely common in the Bible to find analogies or expressions to describe Christ as terms being related to light. Yet David doesn’t merely state ‘light’. He compared directly to the rays of the sun of dawn – the first rays of light to enter the sky. As it is the morning light, it will grow and increase slowly, and will eventually shine brighter. The path of the righteous is like the first gleam of dawn, shining ever brighter till the full light of day [Proverbs 4:18].

on a cloudless morning – what’s more, it was on a cloudless morning. Nothing to obstruct the light from our eyes. The light is clear. It guides us out of the darkness, it is the first and the earliest to greet us. It gives us hope for a new day and clarity to see our way. In a cloudless morning, there are no forebodings of dark times, no threat of storms that would shake and engulf the village.

like the brightness after rain – whenever the Bible talks about situations that are after rain, I would remember the rainbow, which is a sign and a convenant of God’s protection and presence toward mankind. David makes a comparison here – comparing the ‘light of morning at sunrise’ to the ‘brightness after rain’ that God spoke of. Christ is not only that first ray of light that we’ll see in the day after a long night of darkness, but He is also that light that we will witness after a storm. He is that hope.

that brings the grass from the earth – and that hope is a hope that produces new life. With both warmth from the sunlight and water from the rains; grass wil sprout from the ground. A righteous ruler will produce fruitfulness and happiness in his people, gives his people a reason to hope and to live. Why didn’t David use flower here? Or why not say trees sprouted from the ground? He wanted to see how that would work too! As pretty as you think flowers are and as useful as a tree may seem to be, a grass is resilient. Connected to God through Christ, our foundation and roots are firm, and that’s what our faith is built on.

Like a grass that sprouts from the ground, we have been showered by the gospel of Christ. If a grass tried to live on its own, refusing water and sunlight, it would only wither away. That is the importance of God’s words to us.