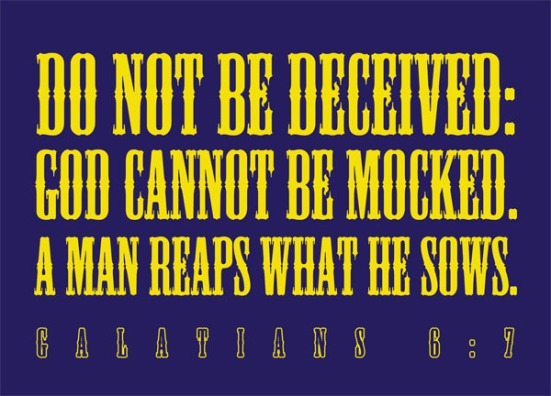 The book of Galatians is notable for Paul’s defense of his apostleship, which was given in unusual circumstances, and his defense of the gospel of Christ, in which we are justified by faith and thus are free from sin and the law. The churches of Galatia faced a number of Judaizing teachers, who preach for Gentiles to be circumcised and keep the Law of Moses, and in order to gain credibility, they spoke against the credibility of Paul’s apostleship and questioned his way of the Christian life. In a book that also introduced the 9 fruits of the spirit to us [Gal 5:22-23], Paul also reminds about what being a Christian means and warns against any half-hearted actions. In this study we will examine the notion of mocking God – and what it really means in the context used by Paul towards the Galatians.

I would like to think that none of us, as Christians, would intentionally set out to mock God.I don’t think that’s what Paul means here in the last chapter of the book of Galatians. Let me first state the two crucial points that I’ll be riding on during the process of today’s study:

Why is this important?- I’m sure in your entire Christian life you’ve encountered people who have mocked Christianity and God before. Even if you’re blessed enough to have never met such people; there are countless of mainstream media, music, entertainment that has parodied our God. I don’t think that was what Paul was referring to when he said God cannot be mocked; because, well, according to my humble knowledge; people today, people yesterday, people tomorrow – they have been mocking God, and they won’t stop. Whether we want to face it or not, whether we want to like it or not, God has been mocked.

2. Paul wasn’t referring to ‘mock’ as in blatantly making fun of, or looking down on. I would like to think that none of us, as Christians, would ever set out to mock our God. A person who claims to be a Christian and yet mocks God must have severely misunderstood the meaning of the term ‘Christian’, and cannot truly be regarded to be a Christian. Instead, what Paul was referring to was likely to be that, we cannot possibly impose ourselves on God. God cannot be imposed. Even if we appear to be sowing in faith, God will not be fooled if we were merely sowing in flesh. We may fool  others, we may even fool ourselves into thinking that we are truly sowing in faith – but God cannot be deceived [Job 13:9], God cannot be mocked. Do not use a half-hearted attempt in the practice of faith to beat away the commands that God has given us. Do not use perfunctory words or actions to respond to God’s words and pretend that you’ve given your all. Be clear to your own actions, and your own thoughts and desires, and align them to God’s words.

Analysis: Do not be deceived

We are easily deceived when we do know have sufficient understanding of God’s kingdom. There’s so much to know about God’s Kingdom, and how many people dare to claim that they truly understand all of what have been revealed to us? No, just to put things into perspective, the average Christian probably don’t even understand a single percent of the all the knowledge available regarding God’s Kingdom. And so Paul warns, do not be deceived. If society opines and tells you that it is okay to just go to church on Sundays and that’s all that is to being a Christian, don’t be deceived: God cannot be mocked! Perfunctory or obligatory deeds, even if they are good deeds, will be seen through by God, who knows our hearts [Luke 16:15]. If the world tells you that it’s okay to sin in order to please God ultimately – do not be deceived! – It’s like robbing a bank and offer the stolen money to church. Or telling a lie in order to go to church – really debatable, but I personally don’t agree with doing that. Ultimately, Paul tells us a man reaps what he sows. You are what you are. You get what you give. Don’t expect God to honor you for your offering if you have cheated, killed, harmed, lied in order to get that money. Let’s look at that in respect to the next verse.

The one who sows to please his sinful nature, from that nature will reap destruction; the one who sows to please the Spirit, from the Spirit will reap eternal life [Gal 6:8]. If you have been sowing in flesh, don’t expect to reap anything other than destruction; if you have been sowing in faith, you will reap eternal life. You aren’t a Christian just by calling yourself a Christian or going to church every Sunday. If you are a Christian just because you worry that there’s a chance that the Christian God may be true and you will end up in hell if you die, and so you just want that immunity from hell card, which many churches seem to readily give out – if you are a Christian like that, you really aren’t a Christian at all. A true Christian sows in faith – he believes with his heart and confesses with his mouth; he follows the word of God to the best of his abilities and while he occasionally wavers in his faith, he never loses it. 2 Cor 9:6 – Remember this: Whoever sows sparingly will also reap sparingly, and whoever sows generously will also reap generously.

It is easy to identify ourselves as Christians – but how often do we check ourselves if we have been deceived – whether by others or by ourselves – into attempting to mock God, not by blatantly insulting him, but by undermining his authority and the sovereignty behind his words? Whether intentional or not, no matter how we try, we cannot impose on God. We cannot force our wishes and our whims on him. God will always be God. And, going out of point, even if mankind mocks him generation after generation, time after time – he is not affected, and will always remain unchanged.

God cannot be mocked. Hence, let’s work harder to ensure that we are not perfunctory in doing good works.