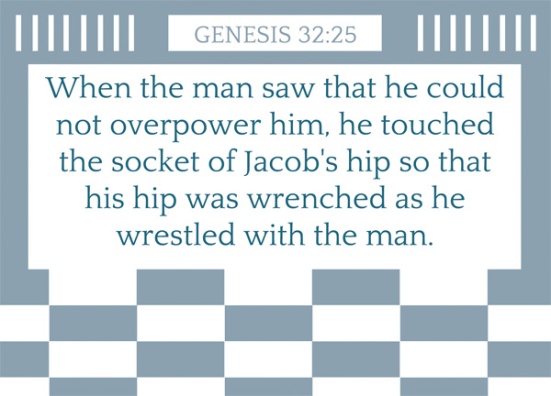 When the man saw that he could not overpower him, he touched the socket of Jacob’s hip so that his hip was wrenched as he wrestled with the man.

This is the story of Jacob wrestling with a man, who is widely understood and accepted as God in the form of man, a well-known episode in the nervous lead-up to Jacob’s confrontation with Esau. Jacob had been worried that Esau was still after his life, after all, Esau was the very reason why Jacob fled away from home to Laban’s [Gen 27]. Jacob then came up with a plan, sending waves of tributes and gifts after gifts to Esau, hoping that by the time Esau meets him, he would have been appeased by the gifts. After sending his family and possessions across the stream, he was left alone, and it was in his solitude that he had a wrestle with God. In this study, we will examine the nature of this supernatural encounter, and its impact on Jacob.

We know that Jacob was extremely worried about having to meet Esau again. They last parted on bad terms, with Jacob having ‘stolen’ Esau’s blessings from Isaac, and Jacob had to flee from the wrath of Esau. We’re told that Jacob was in great fear and distress [Gen 32:7]. Let us consider Jacob’s inner struggle at this point: The blessing that he had ‘stolen’ from Esau – May God give you of heaven’s dew and of earth’s richness – an abundance of grain and new wine. May nations seve you and peoples bow down to you. Be lord over your brothers, and may the sons of your mother bow down to you [Gen 27:28-29] – his family and wealth all originated from the blessing that he had stolen from his brother Esau. But now in one moment of possible vengeance from Esau, all these could possibly be destroyed. This was a blessing that Jacob had, supposedly, stolen. Was this blessing truly his to keep? Did he really deserve all these blessings that he now had, since they all originated from tricking his father?

There is one major unusual thing about this entire wrestle – we’re told that the man himself said, Your name will no longer be Jacob, but Israel, because you have struggled with God and with men and have overcome [Gen 32:28]. Does that mean that Jacob had won the wrestle with God? How can that be? Isn’t God almighty and all-powerful? How could God possibly lose a simple wrestle with a man like Jacob? He wasn’t even Samson or anybody known particularly for his strength. He was Jacob, coward, shepherd, farmer. We are also told that during the wrestle itself, the man saw that he could not overpower Jacob [Gen 32:25]. Now, isn’t that very strange?

In essence, what did the entire wrestle represent? Probably the authority of God? Your way or my way. Your will or my will. In essence, when the man couldn’t overpower Jacob, it simply meant that Jacob was so fixated on his own will and ideas, and at that point was unwilling to give them up to God. Do you have a child? Have you ever played a game of chess, or cards, or ball with him or her before? Have you ever lost in purpose? It was almost as if Jacob was playing a chess game with God, and it seemed like he was going to have an overwhelming victory – he has cornered most of the enemy’s pieces. Yet with just a single move, God can spring a checkmate – with just a touch of the socket of Jacob’s hip, God turned the tables over. The entire chess game has been in God’s plan all along – like a parent, he allows the child to try his hardest and fight, and perhaps the child may even win, but he can only win by the grace of the father. When we wrestle with God, we often think that we win, and we cling to our ways and our ideas. But ultimately, by losing the chess game on purpose, God is the final winner.

The wrestle could have gone on for a while longer yet, but when daybreak was approaching, the man asked to leave [Gen 32:26]. We have to remember that there’s always a time limit to our wrestles with God. We cannot wrestle with God forever. When the daybreak comes, we must make a decision.When daybreak comes, the man will leave, and Esau will be here. Jacob will have to face his greatest fear. It will no longer be a wrestle. Truthfully, the man didn’t need to ask for permission to leave, did he? That was just plain odd, because Jacob was already injured, there was no way he could have chased the man down should he just turned to leave. But God will always ask us that question – are you ready to let go of this wrestle with me? Are you ready to let go of your own ways and ideas and follow mine instead? Are you ready, for daybreak is coming? At the moment when Jacob’s hip was hurt, I would like to think that he suddenly understood that he was weaker. When he understood that daybreak was approaching, and Esau was coming – and faced with the fact that he was actually a weak person – he made his decision, and he clung on to God. I will not let you go unless you bless me [Gen 32:26]. Esau was coming. By his own strength, Jacob won’t be able to face Esau. Clinging to God for his blessing was the only thing left, that could possibly save Jacob from Esau. Cling to God for strength, because we are weak.

Surely we all have our own struggles in life. But often, we tend to mistake our struggles with God as struggles against others or struggles with ourselves. When you are down, remember that you’re not fighting against the devil. It is merely but a wrestle with God. And from Jacob’s example we understand a few things – the wrestle with God won’t go on forever. The daybreak will come. The wrestle will end. And if we would only choose to cling on to God, as Jacob chose to do.