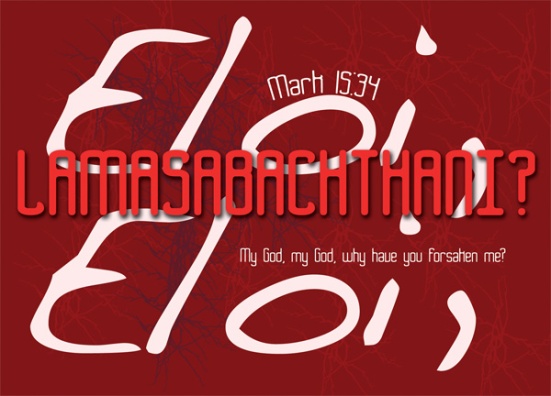 And at three in the afternoon Jesus cried out in a loud voice, “Eloi, Eloi, lema sabachthani?” (which means “My God, my God, why have you forsaken me?”).

Have you heard of the Seven Last Words on the Cross?

Mark 15:34 is the fourth saying/prayer of Christ on the Cross – fourth from the beginning and fourth from the end. Matthew 27:46 is generally translated to be the same as Mark 15:34, although there is an inherent difference in the original versions – they were written in different languages. The differences were mild, however, and I’m no linguist so I shan’t go into that. Today is Good Friday, and in today’s study of the 4th prayer of Christ on the Cross, we will focus on the word forsaken and ponder upon the sufferings of Christ as he uttered that prayer.

Why have you forsaken me – This cry was not first uttered by Jesus. It was first recorded in the Bible as a psalm of David, and perhaps it was a psalm that many have sang and cried out time and time again over the years, before Christ cried it out on the cross. My God, my God, why have you forsaken me? Why are you so far from saving me, so far from my cries of anguish? [Psalm 22:1] I recall that a couple of weeks ago, in Pope Benedict’s final address, he said that, ”…there were moments, as there were throughout the history of the Church, when the seas were rough and the wind blew against us and it seemed that the Lord was sleeping.“ There were moments that the Lord seemed sleeping.

Let us consider the plight of Jesus at the point he cried that out – it was the fourth saying on the cross – neither the first, nor the last. It was in the middle, when the pain was the most excruciating. Both Matthew and Mark told us clearly that it was about the ninth hour – or three o’clock in the afternoon when Jesus cried this line out. It is said that it was around the ninth hour that the Jews traditionally offer up their sacrifices. How true is that, I have no idea, but this was clearly a heartfelt cry in the peak of his pain. He didn’t say it at the beginning, he didn’t say it when he no longer had strength – he struggled, bore the pain, and when it was the hardest to bear, he cried out, Eloi, Eloi, lamasabachthani?

Why so special? Eloi, Eloi, lamasabachthani. Why was the other 6 sayings of the cross not kept in the original language? Why just this – my God, my God, why have you forsaken me? Jesus had probably spoken in a different language then the one Mark or Matthew used to write in. Some say it’s Hebrew, some say it’s Syriac, others say it’s a form of a hybrid between the two. Perhaps this line is special to the Jews. Jesus did not cry this out as God – he was 100% man when he was on earth, he was 100% flesh when he was crucified, and he felt the pain completely. When he cried, ‘my God, my God’ – he was crying it out as a man, a man in suffering.

Eventually, even after saying this, Jesus understood that God’s will was completed, and committed his spirit unto the Lord. Had God forsaken him? If forsaking him means that God hardened his own heart to sacrifice Jesus on the cross, then yes, yes, that’s what God did. If forsaking him meant that God closed an eye and did nothing while watching his own beloved son going through such immense suffering – then yes, God did forsake Jesus. But in the wider picture, did he? Surely God could have enabled Jesus to be crucified without feeling any pain. But what would be the point of that? For God’s will to be completed, Jesus had to be sacrificed – completely and genuinely. Christ wasn’t sacrificed for show just so that God’s will can be fulfilled. It had to be genuine. And this line – Eloi, Eloi, lamasabachthani – this is perhaps our best evidence that Jesus truly suffered at the cross.