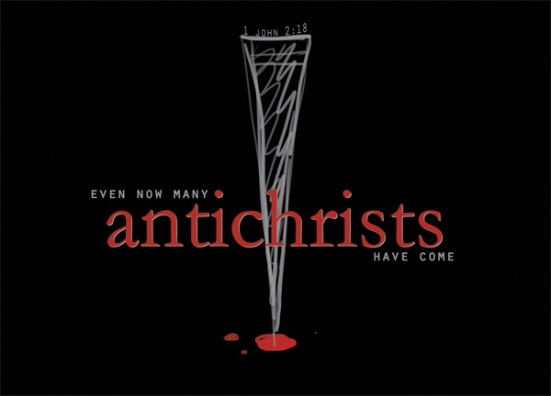 The author of the 1st, 2nd, and 3rd books of John are, well, John. The same John as the one who wrote the gospel of John, but more importantly the same John as the one who wrote the book of Revelations. He wrote at length about the Antichrist – the one who would be coming at the end of the world, but in this verse, our focus is the many antichrists that already exist in John’s time, and who exists today in our time. Before we rush off with theories about the antichrist, let me first emphasize that we’re not discussing that Antichrist of the book of Revelations. Revelations is a great book that, if studied properly, reveals a lot about the world of today and the world of tomorrow. Yet, it is not a book that I wish to start an analysis on anytime soon. Hopefully, one day, but not now.

Defining an antichrist – The word is simple enough – antichrist antichrist, a person who is ‘anti’ to christ, a person who is against christ. John wrote a lot about the antichrist, a few verses down, he explains – Who is the liar? It is whoever denies that Jesus is the Christ. Such a person is the antichrist—denying the Father and the Son [1 John 2:22]. It is interesting to know that John equates a person who lies as an antichrist – harsh, but it pretty much underlines one of the main characteristics of an antichrist – the ability and tendency to lie. Well that doesn’t mean that we can or should label every liar as an antichrist – certainly not, but an antichrist lies about God, the spiritual realm, about Christ. An antichrist, much like the false prophets during the days of the apostles – denies God, rejects the truths, argues against it, lies about it, and attempts to influence others away from it. We see more of this in 2 John 1:7 –  I say this because many deceivers, who do not acknowledge Jesus Christas coming in the flesh,have gone out into the world. Any such person is the deceiver and the antichrist. Some of them will merely tempt and and try to draw us away from Christ. Others will even claim to take the place of the Messiah – For false messiahs and false prophets will appear and perform signs and wonders to deceive, if possible, even the elect [Mark 13:22]. Have wisdom. Have discernment. Do not be swayed or taken in by the lies of these antichrists.

John elaborates on another characteristic of an antichrist later on in the book – but every spirit that does not acknowledge Jesus is not from God. This is the spirit of the antichrist,which you have heard is coming and even now is already in the world. [1 John  4:3] – Likewise, this is not to say that everyone who does not acknowledge Jesus is an antichrist – I don’t think its fair to draw such a hasty conclusion from John’s words. I think all he’s trying to say that antichrists have such a characteristic – they do not acknowledge Christ, the gospel of Christ, the doctrine of salvation, his grace, his love, the good faith. Do not assume that once you’ve been a Christian, you will be able to easily stay in this faith forever. No, we as humans are entirely capable of turning our backs against God and becoming his enemy. The Spirit clearly says that in later times some will abandon the faith and follow deceiving spirits and things taught by demons [1 Tim 4:1]. Be very careful. Test every spirit [1 John 4:1]. A lot is at stake.