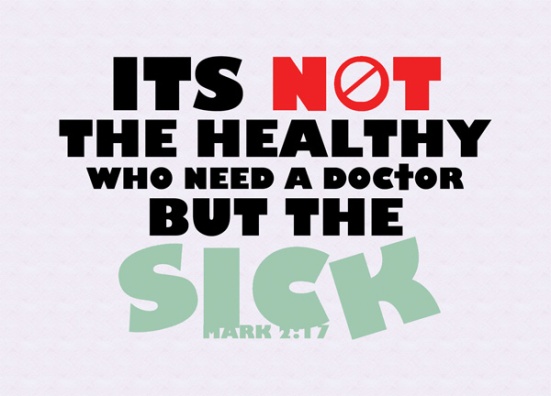 On hearing this, Jesus said to them, “It is not the healthy who need a doctor, but the sick. I have not come to call the righteous, but sinners.”

This is a remarkable verse. A remarkable statement that Jesus declared, recorded in the Bible in Matthew 9:12, Luke 5:31 and Mark 2:17. He said this seemingly as a response to the charge and the insinuations of the Pharisees, but perhaps it was more for the sake of the disciples who were present that he declared this. This is a proverbial statement, and like most other proverbial verses it can almost as easily be interpreted in one way or another vastly different way. In today’s study, we will be looking into who exactly the sick refers to.

On hearing this – context is very important here, for Christ did not say this out of nowhere. He said this strategically for a purpose, for two audiences. Firstly the sick, and secondly the sick. Both audiences were sick, indeed, but they were very different kinds of sick people. One of them was sick but would not respond to the doctor. The other type was sick, but understood that he was sick and responded to the doctor. Yes, indeed, the first group did not believe in the doctor, did not trust him, did not think that they were sick. What was the scenario that prompted Jesus to make such a statement? Mark 2:15-16 tells us that Jesus was eating with the tax-collectors and sinners at Levi’s house, and the Pharisees asked why.

It is not the healthy who need a doctor, but the sick – in life this is a very simple notion. We call it common sense. If you are sick, you need to see the doctor. If you’re not, then don’t see a doctor. If we translate it to the spiritual aspect of our lives, it should be common sense as well. If we are spiritually ill, we need to seek spiritual healing. If we have turned away from God, we need to return to God. Yet, while it is often easy to notice if we are physically ill, spiritual illness often escapes our notice until it’s very very late. Much like emotional illnesses.

The real question here is, who is healthy and who is sick? Admittedly I once assumed that the healthy referred to we who are Christians, we who have been saved. In this regard, those who are yet to be saved and did not believe in Christ are the sick ones. There are probably way too many loopholes in this very perspective. And then there was once when I thought that the healthy referred to the Christians who were following God’s words, and the sick were the Christians who had strayed away from God’s words. Again, this is probably a very flawed perspective.

Let us refer to Jeremiah 8:22 – Is there no balm in Gilead? Is there no physician there? Why then is there no healing for the wound of my people? There was balm – the most excellent ones, in Gilead. There were physicians, the most skilled ones, in Gilead. But there was no healing for the wounds of the people. The Israelites were metaphorically referred to as a diseased people, spiritually and morally diseased, sinning against God. They can choose to repent and turn back to God – the cure is there – but they didn’t, and instead provoked the Lord’s wrath. In Lamentations 2:13, Jeremiah cries, What can I say for you? With what can I compare you, Daughter Jerusalem? To what can I liken you, that I may comfort you, Virgin Daughter Zion? Your wound is as deep as the sea. Who can heal you?

I have not come to call the righteous, but sinners – this gives us a huge hint of who’s sick and who’s healthy – the righteous are healthy, the sinners are sick. We have been told (by Paul) that there is no one righteous, not even one [Rom 3:10] and all have sinned and fall short of the glory of God [Rom 3:23|Article]. We are all sinners, and none of us are righteous. In other words, we are all sick. In other words, we need the doctor. In other words, Christ came for us. Perhaps this verse is not so much to divide the people into who’s sick and who’s healthy – but really to show us that we, all of us – Pharisees or disciples, need God equally, because we are sinners. Let us not rest on our laurels and be satisfied in knowing that as Christians, we no longer need the doctor – because that is entirely untrue.

When we turn to God, when we call on his name, we become justified through faith, we have peace with God through our Lord Jesus Christ [Rom 5:1] and we are no longer condemned [Rom 8:1].

All of us need the Lord.