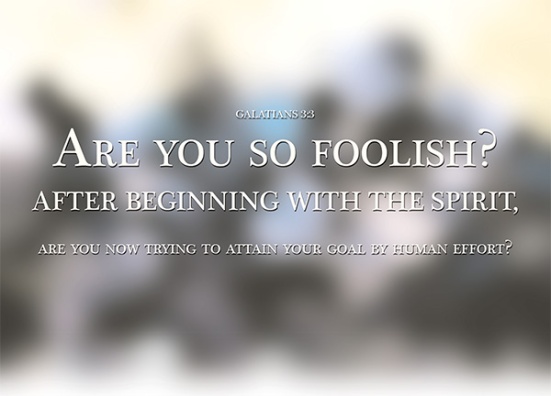 Are you so foolish? After beginning with the Spirit, are you now trying to attain your goal by human effort?

In Galatians 3 Paul begins with a chastisement to the Galatians as he clarifies the importance of faith versus the works of the law. This is basically Paul defending the gospel and his way of the Christian life. In other words, this was Paul’s Apologetics 101. From Galatians 3:1-14 Paul quoted from the Old Testament Scripture 5 times as he built a strong case that he wasn’t a heretic – this gospel was not made up by him, but based on the word of God. To the Galatians, this was probably a wake-up call for them who had turned away and believed the claims of the Judaizing teachers, who preach for Gentiles to be circumcised and keep the Law of Moses, and in order to gain credibility, spoke against the credibility of Paul as an apostle. In the beginning of our faith, we are often passionate and we often feel filled with the Spirit. As time passes, our passion fades, our faith wavers, and we begin to cling to routines and rituals rather than the Spirit. This is common. We all need a wake-up call. In this study we will dive into Paul’s chastisement of the Galatians and treat it as our wake-up call.

After beginning with the Spirit – The aftermath of the filling of the Holy Spirit at Pentecost [Acts 2:4] as foretold by Jesus in Acts 1:8 – But you will receive power when the Holy Spirit comes on you; and you will be my witnesses in Jerusalem, and in all Judea and Samaria, and to the ends of the earth resulted in many being filled with the Spirit and living out the gospel –

They devoted themselves to the apostles’ teaching and to fellowship, to the breaking of bread and to prayer. Everyone was filled with awe at the many wonders and signs performed by the apostles. All the believers were together and had everything in common. They sold property and possessions to give to anyone who had need. Every day they continued to meet together in the temple courts. They broke bread in their homes and ate together with glad and sincere hearts, praising God and enjoying the favor of all the people. And the Lord added to their number daily those who were being saved. [Acts 2:42-47]

– they began with the Spirit, they were filled with the love of God, they had compassion for others, they clung on to the word of God, and so on. It was a new life – they were new creations [2 Cor 5:17|Article]; they set out on their Christian journeys in the right track and in good stead.

are you now trying to attain your goal by human effort – the goal, or in other versions, perfection, or the finish. Usually, when Paul speaks about the goal, he means Spiritual Perfection [Phil 3:12] and not so much our heavenly rewards, though some have interpreted it as such and it’s probably not wrong either. But keeping the law will not bring about spiritual perfection. Observing the rituals, performing the ceremonies, distinction of meat – none of reflects spiritual growth or spiritual perfection. Not by works – specifically, the works of law, or by the flesh in other versions – but by faith.

Are you foolish – Trying to attain our goal by works of law is foolishness. Why? The next verse tells us why – have you suffered so much for nothing – if it really was for nothing? [Gal 3:4|Article] – our past suffering will mean nothing and amount to nothing if we try to attain our goal by human effort, because we will not attain this goal by works. Imagine you’re a youth worker, and you meet a youth who is a drug addict. Hard core drug addict. You interact with him, counsel him, and he decides to rehabilitate. It’s a painful process, he suffers cold turkey, but with your encouragement and with sheer willpower, he successfully gets out of his drug addiction and finds a job, gets a girlfriend, and leads a happy, drug-free life. A year later, you bump into him again, and he looks hagard and his eyes are hazy. He has gone back to his drugs. You are disappointed. The months of cold turkey that he suffered through then were for nothing. That was likely how Paul felt when he asked the Galatians, are you foolish? It’s a rhetoric question. You are foolish – is what he is saying. What a stupid and meaningless thing to do. Do you not know what you are doing? Are you not aware that you are seeking spiritual perfection from the wrong means?

We are often foolish. The Bible tells us not to be foolish – Therefore do not be foolish, but understand what the Lord’s will is [Eph 5:17]. Yet we are often foolish. These people from Galatia were witnesses of the crucifixion of Christ [Gal 3:1]. When they received the Spirit at the Pentecost, they didn’t receive it because they observed all the rituals and performed all the rites, but because they believed [Gal 3:2]. Yet they somehow lost sight of that, somehow lost sight of the Spirit, and instead began to rely on the law. They needed a wake-up call, just as we do today. It’s easy to be passionate and cling on to the Spirit after every bible study class, prayer meeting, gospel camp or the like. But as humans, our passion dwindles with time, and we fall into a comfort zone where we’re satisfied with fulfilling our spiritual obligations through laws. Our spiritual life becomes all about routines and boxes to check, and in turn, the period of time when we were once filled with the Spirit and full of faith amounts to nothing.

Let us not be foolish any longer. Not by flesh, not by the works of the law, but by faith. By the Spirit.