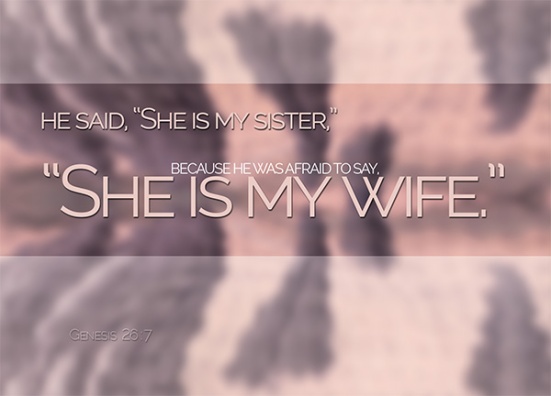 When the men of that place asked him about his wife, he said, “She is my sister,” because he was afraid to say, “She is my wife.” He thought, “The men of this place might kill me on account of Rebekah, because she is beautiful.”

The Wife-Sister Incident happened three times in the book of Genesis, twice by Abraham (or Abram) and once by Isaac; twice to a Philistine king and once to Pharaoh; twice in Egypt and once in Gerar. Twice exposed by God (through a disease and through a dream), once discovered by sight of the couple’s intimacy. And in all three times, the patriarch was not punished but instead immensely blessed after being exposed. There was once when I discussed Abraham’s Wife-Sister Incident with a group of young ladies, and as you can imagine, we were unanimous in our very modern and feministic view that it was a horrid move on Abraham’s part (and to think he did it twice!) I still cannot get over the fact that Abraham did the same thing twice, but today we will be looking at Isaac and the parallels between each of the three instances.

Because of a severe famine, Abram and Sarai, who were childless at that time, went to Egypt. Having heard of the infamous reputation of the Egyptians, Abram believed that they could possibly kill him so that they can gain his beautiful wife, and because of that, instructed her to hide her identity as his wife and pretend they were siblings. Abram was right – the Egyptians were in awe of her beauty, and the Pharaoh took her into his harem. Eventually, the Lord struck Pharaoh and his household with serious diseases and Pharaoh chased Abram and Sarai away, though not before showering him with gifts and making him very wealthy.

It isn’t all that strange that Abram would fear that the Egyptians would kill him because of his wife’s beauty. It wasn’t a far-fetched thing, really, after all, even a man as righteous and godly as King David did that too – kill the man, take the wife. It’s strange, however, how a people whom Abram thought was capable of killing him to take his wife didn’t hurt him at all when the truth was exposed. The Pharaoh had every right to reclaim all the gifts that he had granted Abram, but he didn’t. The Pharaoh could have done what Abram expected and kill the man and keep the woman; but he didn’t.

After the incident with Lot, Abraham went to Gerar for a while, and having noticed that the people there do not fear God, the same old fear struck him – he feared that they will kill him and take his beautiful wife. So he claimed Sarah to be his sister once again, and Sarah was taken into Abimelech’s harem. Before the king had an opportunity to be intimate with Sarah, however, God appeared to him in a dream and chided him. The Lord also closed every womb in his household. He confronted Abraham, who gave a very self-righteous defence of his actions, and returned him his wife and showered him with lots of gifts and the choice of his lands. Abraham then prayed for him so that the women in his household were healed.

I cannot understand why would Abraham do the same thing again. Didn’t he learn anything from his previous experience? Didn’t he learn that as much as he feared death, as long as God was with him, even a horrible situation – like being exposed for such a major lie – can become a blessing instead? Didn’t he learn that there was no need for him to pretend, because God will intervene? No, he didn’t learn at all – in fact, while in the first instance he asked Sarah to claim that she is her sister, he didn’t even bother doing that this time round. He simply did it.

Isaac was not born in those two instances, thus he would not have experienced either of Abraham’s actions and decisions. While he might have learnt about it later on, surely such a deed cannot be inherited and should not be imitated? It is strange that Isaac of all people would do something that – Isaac was known to love Rebekah dearly – in fact, among all the patriarchs of Israel, he was the only one who only had one wife. What makes this instance even odder is the eerily similar circumstances with Abraham’s incident.

Because of a famine, Isaac went to Gerar, met Abimelech the Philistine king, lied that Rebekah was his sister out of fear for his own safety. While there was no indication that Abimelech took Rebekah into his harem, there must have been some attraction at least, for Rebekah was beautiful. Perhaps because Abimelech hadn’t taken her into his harem, God did not intervene directly or harshly; instead, Abimelech uncovered the truth when he looked down from a window and witnessed Isaac caressing Rebekah. Abimelech then showered Isaac with gifts and promised him and his wife protection.

Abimelech, Abimelech. Was it the same king, same person? It must have been a horrific case of ‘deja-vu’ if the ‘Abimelech’ mentioned in both cases were the same man. Most likely, it wasn’t the same man, for there were several decades between the two instances. Isaac wasn’t even born when Abraham was at Gerar, and we know for sure that Isaac was 40 years old when he married Rebekah. So there must have been at least 40 years between the two instances. Abimelech was a common name for the Philistine kings, and the two kings could have been father or son. The same logic can be applied to the two commander of forces that appeared in both instances – both called Phicol [Gen 21:22, Gen 26:26].

Abraham had earlier called Gerar a place without the fear of God. Surely Isaac would have felt the threat that Abraham felt too. However, there was one excuse Isaac couldn’t use – Sarah was indeed a sister of Abraham’s (how convenient!) – a half-sister with a different mother. It’s not a lie, but merely a concealment of the whole truth. Not that it absolves Abraham’s deed, but it makes Isaac’s basis for such a total lie even weaker. Rebekah was Isaac’s distant relative, a cousin or a niece at best. Not a sister, but a wife. A child may follow not only the good that a parent does, but also the bad. The Wife-Sister farce was a sin that Abraham repeated, and repeated sin grows. Abraham told a half-truth, Isaac told a lie.

It was sad that in all three instances, but especially in Isaac’s case, the king’s actions appear more upright than the patriarch’s. A man of God was rightly rebuked by a man he had wronged, yet for God’s sake, he received protection, mercy and peace. Isaac was a child of promise, and he inherited the promise that God made to Abraham. Yet he allowed his fear of the men in Gerar to lead him to sin. Deception was a recurring theme in this family – Abraham’s two instances of the Wife-Sister farce, Isaac’s Wife-Sister farce and the blessings that he gave while being deceived; Jacob being cheated 7 years to marry Rachel, the deceptive selling of Joseph – the list goes on, and the recurring sin of lies never eased up on this family.

Parenthood, or spiritual mentoring, comes with huge responsibility. The best way to prevent your child from picking up your repeated sins, is to not commit them in the first place. And in the event that you do sin, for we surely all do, learn from your mistakes, and don’t repeat the same sin.