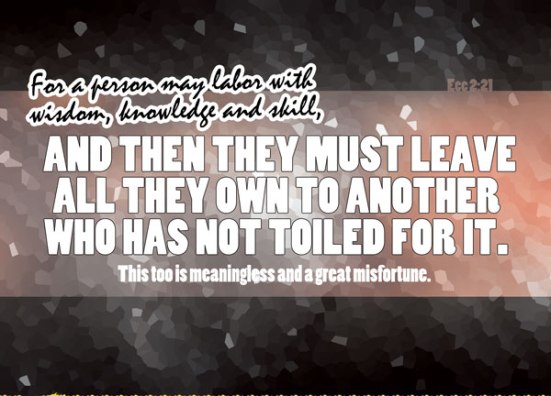 For a man may do his work with wisdom, knowledge and skill, and then he must leave all he owns to someone who has not worked for it. This too is meaningless and a great misfortune.

In Ecclesiastes 2 King Solomon reveals the flaws about the human mindset that gaining possessions will lead to happiness. He was perhaps the expert on this, and hence fully qualified to speak about it, for he had owned everything; he had possessed everything, he had gained everything. Wealth, fame, status, knowledge, women – but even so, he wrote vanity, vanity, all is vanity [Ecc 1:2|Article]. In this verse especially we see how Solomon thought of the idea of toiling and larboring all your life for the sake of leaving behind a legacy to those after you – utterly meaningless. In this study we will examine Solomon’s claim while looking at the legacy that he left behind.

Not many people will enjoy the supposed gloom and doom that covers the book of Ecclesiastes. I’ve heard people joking that Ecclesiastes is for a book for old men and women. Quite the opposite, I would think. It was a book written by an older Solomon (while he did not name himself, stylistically and thematically there are strong signs that point the authorship to him), based on his unique and rich life experiences, and younger people will likely learn the most – or have the most room to apply what they learn from the book in their lives.

Meaningless – or vanity, depending on your version, or the idea of the catching of winds and grabbing at shadows – phrases and terms that connotes the idea of meaninglessness populate the book. Indeed, Solomon does pretty much say that everything is meaningless in the book. The pursuit of wealth, status, fame, women, knowledge, wisdom – everything.

If that was all he had said, it would really be a book of gloom and doom. Yet despite so much of what we perceive as pessimism, there is the undercurrent of his belief in a great hope in the book – a hope so much bigger and better than everything else.

For a man may do his work with wisdom, knowledge and skill – a random man was used in Solomon’s analogy, and the analogy given was an ideal one – a diligent man, perhaps, who labored in the right ways, applying what he knew and what he had to achieve many things in life. Perhaps he gained a great many things. Perhaps he achieved all his life goals. In the eyes of the world many of us would be envious and would certainly call this a very good and fulfilled life.

Even so, Solomon did not have mercy, calling it a great misfortune – not just a misfortune – and meaningless. Why?

and then he must leave all he owns to someone who has not worked for it – the key word here is ‘and then’. Sure, by our standards – by anyone’s standards – the man in the analogy might have lived a very good and fulfilling life. Solomon robs us not of that. He didn’t call it bad. But what happens after that? And then?

It is sad, but we can all answer that even if we do not know the man. At the end of his good, great, wonderful life, he dies. He dies, bringing nothing along with him – naked a man comes from his mother’s womb, and as he comes, so he departs. He takes nothing from his labor that he can carry in his hand [Ecc 5:15]. So what if he applied his wisdom and knowledge and skills and lived a fantastic life? Like the fool, the wise man too must die! [Ecc 2:16] Remember: these were not the jealous words of a man who had nothing and was simply calling the forbidden grape sour. No, Solomon had everything. He had a fantastic life. He was that man in the analogy.

He must leave all he owns to someone who has not worked for it – this was his story, yet is this not a common occurrence all over the history of mankind, no matter the era, the culture, the religion? There is a Chinese idiom that says wealth will not last beyond the third generation. In Solomon’s case, it was not just wealth, but the security of an entire prosperous nation. Sure, things were already stirring towards the end of his reign, and Solomon had for a period in his reign experienced a spiritual downfall, but it was during the reign of his son Rehoboam that the ten Northern tribes of Israel rebelled and broke away from Judah. That was a historic divide that saw Israel separated and even in its destruction, they were divided – all the way until modern times. While some May point the finger at Solomon for leaving a mess for Rehoboam, it was quite clear that the new king created his own tragedy – Rejecting the advice given him by the elders, he followed the advice of the young men and said, “My father made your yoke heavy; I will make it even heavier. My father scourged you with whips; I will scourge you with scorpions.” [1 Kings 12:13-14]

Did Rehoboam work for his kingdom? No. Solomon had left his kingdom to someone he doesn’t know was capable of handling it or not – I hated all the things I had toiled for under the sun, because I must leave them to the one who comes after me. And who knows whether that person will be wise or foolish? Yet they will have control over all the fruit of my toil into which I have poured my effort and skill under the sun. This too is meaningless [Ecc 2:18-19]. Solomon did not technically work for his kingdom, too – David left the best for him. Yet it must be argued that Rehoboam simply did himself no favours – while Rehoboam sought wisdom from his young, inexperienced peers [1 Kings 12:8], Solomon sought the wisdom of God [1 Kings 3:9|Article].

So, what? Solomon has established the argument that leaving a legacy behind can be pointless. But where does that leave us? Should we no longer toil and labour because we are in doubt over the capabilities of our successors? Indeed, on hindsight it will seem myopic if you toiled all your life and labored all your life only to see the fruits of your lifelong hardwork squandered in the matter of days. At that moment, it will no longer matter how many people you’ve aided while you toiled or how much joy you had while your labored. That something you worked so hard for would just come to an end like that – it is a terrible feeling, a terrible truth.

But only if we do not have in our sight the eternal hope that God has bestowed upon us. A legacy however glorious will not matter if we are looking forward to the glory we will receive in God’s Kingdom eternally. A legacy however pathetic will not matter if we are looking towards the eternal future. Indeed, if we set our sights on God in life and worship him with fear and thanksgiving, and place our hope in the eternal promise that he has given us, then all our earthly pursuits will have no value at all. Does not mean that we do not work or labor, though – we are also warned not to sloth, but we have absolutely no need to be too hung up over a failure or too upset about loss. So what if Rehoboam caused the split of Israel? Ultimately – I’m not even speaking about current times, but instead in the faraway future, that of eternal status – there the tribes of Israel will once again be reunited.

What good will it be for a man if he gains the whole world, yet forfeits his soul? [Matthew 16:26] – there is no need to employ ourselves obsessively in the pursuits of worldly gains, for it will be for naught if we lose our souls along the way.