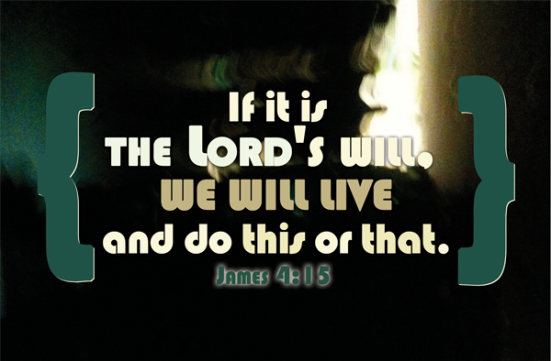 Instead, you ought to say, “If it is the Lord’s will, we will live and do this or that.”

If you are like me, then every time you come across the name ‘James‘ in the Bible, you would perform a mental check in trying to figure out which James you’re reading about, and after 1 second you’ll probably give up. James is a nice name, isn’t it? One of those timeless names that is as popular today as it was 2000 years ago. Many say James the apostle, son of Zebedee and brother of John was martyred before this book was written, so the most likely one(out of 4 mentioned in the Bible) to have written this letter would be James, the brother of Jesus. It was also likely to be the earliest written book in the New Testament, and out of 108 verses in its 5 chapters, about half of them were commands. In James 4, James speaks about submitting to the will of God and how, in contrast of the Lord, we have no control and knowledge of the future.

Whenever I look at this verse I’m reminded of a sister-in-Christ of mine who shared a testimony 2 Christmases ago in a prayer meeting. She was battling her second bout of cancer, and it was a time of pain and uncertainty. I remembered very clearly her positivity and her faith – which was not rooted on healing, but she showed an immense submission to the will of God. Her faith did not hinge on God’s healing – she did not insist that God will heal her; even if God did not heal her, her faith wavers not. Instead, she submitted to God’s will, and confessed that it might even be her last Christmas- she didn’t know if she would live till the next Christmas, but she is living day by day, leaving tomorrow’s worries for tomorrow, and lifting today’s worries up to the Lord. If God willing, she would live and do things for the Lord; if not, she will return home in peace with the Lord.

She was right, she passed away the next summer, never making it to Christmas. Yet having heard that testimony of hers I was very comforted upon her death, and very inspired. I’ve never been that close to death before, but she was a role model for me that I will never in this life of mine forget. There are many such testimonies around us today, it is not uncommon to reflect upon life when in the face of death. I put this bluntly, but her testimony made me reflect – do I want to wait until death is staring at me in the face before I turn back and reflect on life?

We often throw promises around – I will do this tomorrow; I will do that tomorrow [James 4:13]. But who are we to claim that we have a tomorrow? We often take today for granted, not to say tomorrow. James calls this boasting, in reference to the self-centredness and the pride that we carelessly put in ourselves when we make plans for our future. He urges us to say instead, if it is the Lord’s will, we will live – and we will do this and that. Not that we shouldn’t plan for the future, but let us remember that God is the One who decides whether we live or not and how much time we have left, so let us submit to his will in good faith.

In a way, my sister-in-Christ was blessed to have been given the time to sort out her feelings on death. A lot of people die unexpectedly, without having the time and opportunity to place themselves down before God. Unless the possibility of death becomes very real, most people don’t think about it. Some will argue that a quick death spares one from the suffering and the haunting of the uncertainty in a probable and coming death. Perhaps. But are you prepared for the likelihood where you may not have ‘tomorrow’?

Life is like a mist that appears for a little while and then vanishes [James 4:14]. Why, very poetic. Life is like a blur – James reminds us here that life is short. What do you do in your life that is praiseworthy? Life is a continuous struggle for some – Martin Luther, in quoting Psalms 118:17, highlights his will to survive and do God’s will – I will not die but live, and will proclaim what the Lord has done. I remember once shuddering as the impact of my pastor’s reflections hit me one day, when he shared his trials in mission with us, quoting James 4:15, perhaps with an air of resignation, although in hindsight it was probably the semblance of a total submission to God’s will, a sentiment that was alien to me back then. He said, and I paraphrase, that if it is God’s will that he dies, then he shall depart in peace; and if it is the Lord’s will for him to live, then he will continue to do God’s work, despite the setbacks that he was facing.

If it is the Lord’s will, let us wake up tomorrow morning pledging to once again submit ourselves to His will for our lives. Let us make plans with the will of God in mind, since we don’t know what may happen and how much time we have left. What have you planned for tomorrow?