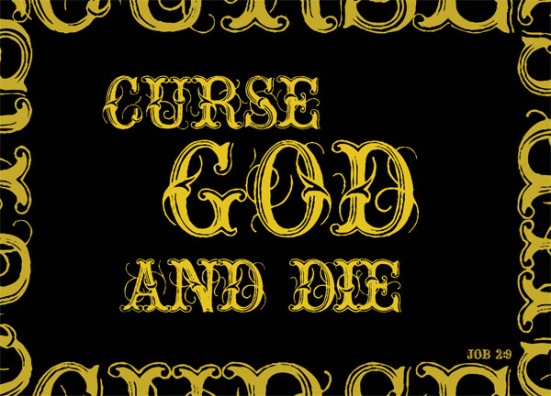 His wife said to him, “Are you still holding on to your integrity? Curse God and die!”

The book of Job is clearly a book rich with the theology of suffering, and we see Job in his difference phases of suffering. However, today’s focus isn’t on Job, as much as he deserves our attention. Today’s attention is on his wife – an unnamed woman, with a sharp reaction towards her husband’s righteousness even in the face of deep, deep suffering; and whom strangely, an individual of Job‘s family whom Satan seemed to forget when striking against Job. God said to do anything to his possessions, but not touch the man himself [Job 1:12] the first time round, and Satan happily killed off all of Job‘s children. Yet the wife was spared. If Job‘s story were to translate to the modern era, perhaps the wife would not have been spared, what with the relationship and status between husband and wife today. Perhaps she was spared just so that she could be a negative influence on Job. I don’t know. There may be several assumptions that I will make in today’s study, assumptions that I will clearly note, as I attempt to build a case for us to be sympathetic of Job’s wife without condoning her words in Job 2:9.

Assuming Job only had one wife, and this was the same woman who mothered all his children; then she had suffered the pain of losing all her children, each of whom she bore after 9 months of pregnancy; lost her financial security in her husband’s assets; and suffered the pain of seeing her husband in misery and pain, being very likely the main caregiver of an ill Job.

I often wonder if it’s more taxing to be the sick one or if it is more tiring to be the caregiver, taking care of the sick one, wondering why you are the healthy one, looking on as he suffers and yet you can do nothing realistically to ease his pain. Imagine being a woman in the old times. She had no rights and no status, and at that point, if her husband Job dies, she loses all her security, and would have had to marry Job‘s brothers in accordance to Jewish tradition.

Her circumstances wouldn’t be any lesser than Job‘s. But what is the basis of telling her husband not to hold on to his integrity, to curse God and die? Did she mean it? Was that what she would usually say, or was that merely a moment of weakness in her faith?

We were never told about the character of Job’s wife, but through Job‘s response we can make a decent speculation or two. It’s all speculation, she could have been the worst wife ever; but I highly doubt so. In Job 2:10 [Article] Job replies, “You are talking like a foolish woman. Shall we accept good from God, and not trouble?” In all this, Job did not sin in what he said. From the tone of his voice, perhaps Job was saying, that’s not how you would usually speak! That’s the words of a foolish woman, not yours! – I don’t know. I hope so. To that end, Job‘s ‘Shall we accept good and not evil’ shut her up. She did not argue on with Job – it could have escalated into a full-blown 10 chapter argument, as with Job and his three friends. Perhaps she was humbled after Job‘s reprimand.

In Job 19:17, in the middle of complaining about how everyone has left him and scorns him, Job reveals, my breath is offensive to my wife. Whether it meant his breath as a result of his illness, or the words that he speaks (which largely hinges on the side of complaining since chapter 3), his wife has most likely stayed away from him and left him to suffer alone.

If Job had really cursed God, would he die? Well, at least Job’s wife thinks so. Rather than him suffering in faith, she’d rather Job put down his integrity towards a God who did not reward him for his devotion – she’d rather he curse God and die. Here we see a distinct lack of faith, here we see a distinct sense of pride. It was her will versus God’s will here – let’s take things into our own hands if God isn’t going to help us.

Even if Job‘s initial show of immense faith collapsed as time passed and he asked God desperately for an answer, he never once cursed God. He may have cursed the day of his birth [Job 3:1] and referred to God as an enemy [Job 33:10], yet he knew that only God could give him a way out – He still trusted in God’s sovereignty.

Job’s wife still fascinates me a lot – what kind of woman was she, really? I’m very sympathetic for her, yet is she worth our sympathy? At the end of the day, assuming that she was Job‘s only wife, she was probably the one who had to suffer the pains of childbearing again as God granted Job seven sons and three daughters [Job 42:13] – as much as some would claim that this was her punishment, I find it hard to think of children as a punishment, although, admittedly, 10 of them must have been equivalent to a significant amount of pain. And the three daughters were probably more beautiful than she was [Job 42:15]. Job‘s three daughters, without doing anything, had their names recorded in the Bible [Job 42:14]. But not Job’s wife.

Putting my doubts about Job’s wife aside, we can learn a lot from this negative example. In times of suffering, a family goes through it together – who can really say whether Job was in more pain or his wife was in greater misery? Yet our reactions make a whole lot of difference. Job never stopped turning to God, even if his faith wavered and he complained and complained at God. At least he was still looking at God and petitioning to God. Job’s wife gave up on God right from the get go, wanting to end the misery earlier by Job‘s cursing God and dying. She is likely an example of the mortal tendency turning indifferent towards God in times of suffering, and wanting to solve the problem with our own means. Even if her circumstances were sympathetic, her actions cannot be condoned. Let us hold on to our integrity. If it is in God‘s will that we die, we will die even without cursing God. Yet, if it is the Lord’s will, we will live and do this or that [James 4:15|Article].