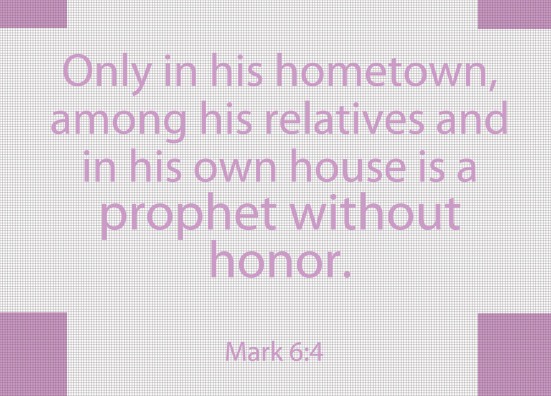 Jesus said to them, “Only in his hometown, among his relatives and in his own house is a prophet without honor.”

The story of the prophet without honour, though short, is notable for not only is it one of the few stories that are very similarly recorded across all four canonical books of gospel – [Matthew 13:57, Mark 6:4, Luke 4:24, John 4:44], it is the one instance where Jesus was recorded to be unable to perform miracles [Mark 6:5]. Basically, Jesus had arrived in his hometown, where everybody knows him as the son of Joseph the carpenter, and was doubtful in their regard of his rather newly attained ‘status’. They knew the Jesus before his ministry began, they knew him while he still seemed ordinary and was just like anyone else. It was difficult for them to accept that he has become a great teacher with plenty of followers and has the ability to perform miracles. They had a false sense of familiarity to Jesus due to their shared background. We too, in modern times, can have a false sense of familiarity to Jesus, which will not be good in testing times.

Try putting ourselves in the shoes of those in Nazareth. Imagine your high school classmate whom you haven’t seen in a couple of years returning one day as a celebrity, telling people big things and with an image you have never associated with him before. What would you do? You’ll likely first go around telling people that you know that fella. After you’ve ran out of new people to tell, you’ll probably start digging out old, nasty tales about that person to tell. Then you’ll start doubting his credentials – how did he managed to climb so high? Cast a question or two – Maybe he did something – cast some seeds of doubts; end up laughing him off, and perhaps predict that his fame will dwindle soon due to a lack of real quality.

Right, that’s extremely speculative, but that’s probably the basis of the significance of the term, a prophet without honour. In all likelihood, a celebrity, a politician, or anybody else who returns to his hometown will be celebrated and honored. But a prophet, whose job is to prophesy, will not be honored. Instead, their words will be doubted (he is the Messiah he says, he’s the Messiah, he says, hey, did you know that he used to live down the street from me?). It’s kinda understandable in a way, and while their lack of faith was pointed out, it wasn’t really about the Nazarenes – it wasn’t that the Nazarenes do not honour their prophets, it’s just that whenever a prophet returns to his hometown, he will often not be honored.

It boils down to the sense of familiarity that the people feel for the prophet, and in the case of the Nazarenes, it was a false sense of familiarity. They thought they knew who Jesus was. They knew him as Jesus the son of Joseph the carpenter, and they assumed that was all he was. They never knew him as the Son of God, and when they heard that he was the Messiah, it was hard for them to accept it. They fell back to their sense of familiarity to Jesus, they fell back to their recognition of Jesus’ identity as the son of Joseph, the carpenter. Being trapped in that recognition, there was no room in their hearts to honour Jesus as a prophet.

The consequences were severe. Because of that, Jesus was unable to perform miracles in his hometown. It’s not like Jesus becomes powerless when people lack faith, but they simply closed up all the opportunities there could be for Jesus to use his power, to perform miracles.

We’re clearly not hometown friends or relatives of Jesus, unfortunately, but we too have a sense of familiarity of Jesus. While we may not often think of him as the son of Joseph the carpenter, most of us do have one or two images or identities of Jesus that we tend to stick to. Some may prefer to think of Christ as our Redeemer more than others. Some may prefer to think of Christ as the Prince of Peace more than others. It’s fine, isn’t it? But perhaps sometimes we limit our understanding of our Lord to just that one or two identities that we’re most comfortable with. Everytime anything happens, we fall back to Christ the Prince of Peace. Christ is the Prince of Peace. Eventually, it could become our modern Jesus the son of Joseph the Carpenter. It becomes our false sense of familiarity with Christ. We cannot see the other qualities of our Lord, as we trap ourselves in a limited understanding of the Lord due to our sense of familiarity.

We often believe that we know God enough. Yet perhaps even if we exhaust our entire lives, we will unlikely even fully understand the one identity that we may be most comfortable with, not to say to understand God fully. How could we ever, really. It’s like friends, really. You think you know your best friend so well, but one day when he does something you absolutely cannot imagine him doing, your image of him is shattered and you are stunned. That’s a very dangerous area to tread into, for friendships. We should be thankful at least that God is constant, never changing – unlike men. If we work on our relationship with him, if we continue to study his words and follow his precepts, we can shorten the gap. We may never in our lives have enough time to close the gap entirely, but surely, it can only get smaller.