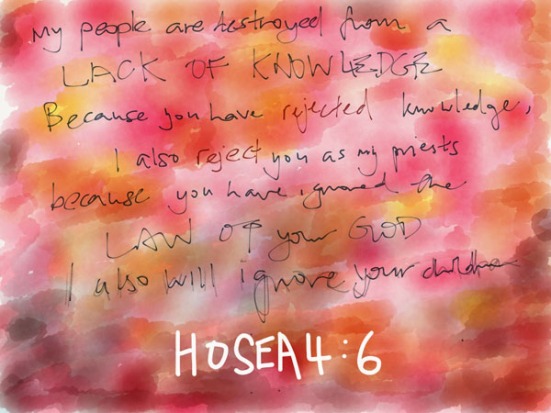 my people are destroyed from lack of knowledge.

Because you have rejected knowledge,
I also reject you as my priests;
because you have ignored the law of your God,
I also will ignore your children.

In all honesty, I don’t really enjoy reading the book of Hosea. It’s not like the historical books that are so linear; or the epistles of the New Testament Bibles which can be dissected apart neatly – there’s usually no fixed format or structure to a prophetic book; the prophets just jump around from prophecy to warning and to anything else that you can find in the Bible. It’s a hard read; and even the verses are very tricky to deal with – more often than not, they are long and consist of more than one major point. These are just my personal preferences though – I would very rarely refer to Hosea; but one day as I was asking one of my friends about her favourite verse of the Bible, she pointed me to Hosea 4:6. More than anything else, this verse struck me as one about holy fear – and indeed, if I talk about the fear of the Lord, the first person in my life whom I would think of would be this esteemed friend of mine.

One of the reasons that I don’t quite like the book of Hosea is because of the prophet Hosea himself. I don’t dislike him, and I’ve nothing against him, yet his story is often too difficult a read for me. Hosea as a prophet served during the reign of the seven kings, prophesying to the northern kingdom just before the destruction of Israel. The most significant point about Hosea was probably not his ministry, but his personal life – his marriage. This is really epic – God commanded Hosea to marry a woman who will be unfaithful to him and become a prostitute – When the Lord began to speak through Hosea, the Lord said to him, “Go, take to yourself an adulterous wife and children of unfaithfulness, because the land is guilty of the vilest adultery in departing from the Lord.” [Hosea 1:2]. Hosea, through his marriage, was supposed to manifest and symbolise the relationship between God and his people – his faithfulness versus her unfaithfulness; his persistent devotion versus her constant adultery. What was Hosea’s reaction to this command?  Verse 3 says – So he married Gomer daughter of Diblaim – everytime I read this part I don’t know what to think. There was no record of Hosea’s reaction – the Bible merely said, So he married Gomer… like it’s so easy. Jonah’s reluctance to follow God’s commands turned out into a whole fiasco of hide-and-seek. Moses’ hesitations transformed into negotiations with God throughout his lifetime. Even Abraham’s doubts were recorded in the Bible even if he followed God’s commands anyway. And you’re telling me Hosea received such a command, said ‘okay’ and just went about marrying Gomer? Well this is a study that can become extremely drawn out, and while a general grasp of Hosea’s background is important to any study of Hosea’s verses, this subject itself is best left aside for further analysis on an another day.

In the first 3 chapters of the book the unfaithfulness of Hosea’s wife is used to illustrate the people; and in chapter 4, Hosea starts to warn the Israelites about their actions – the consequence of their actions, and the promise of restoration that will come after repentance. Hosea 4:6 lies in the midst of one of those warnings.

my people are destroyed from a lack of knowledge – my people here refers to Israel as a collective, and they are destroyed as a whole. It’s not because they have one bad king or bad leaders. They are a collective that lacked the knowledge of God being the true and eternal life. Prophet Isaiah echoes this sentiment – Therefore my people go into exile for lack of knowledge [Isaiah 5:13]; this lack of knowledge is fatal – they not only do not know the greatness of God and that God is the true life, they also do not know that by deviating their paths from God, they are in danger. This danger eventually destroys them.

Because you have rejected knowledge, I will also reject you as my priests – Unaware or ignorant people cannot be priests to the Lord. At that time in the northern kingdom sins were rampant, and even priests were deviating from the law and offering sacrifices in their own ways. While Hosea was likely referring to the priests in general, the idea of priesthood is one that extends to all believers today, as indicated by Peter – But you are a chosen people, a royal priesthood,a holy nation, a people belonging to God, that you may declare the praises of him who called you out of darkness into his wonderful light [1 Peter 2:9]. Today, we are all priests in Christ, a manifestation of the right of our relationship with Christ. Looking at this verse with this perspective then – if we reject knowledge, God will also reject us as his priests. The right to priesthood may have been given by grace through Christ Jesus, but the warning still stands – if we do not know God, and we do not truly know Christ, we will only ever be ‘priests’ in name; for God will reject us as his priests.

because you have ignored the law of your God, I also will ignore your children – In several versions the word ignore is rendered here as forget. Rejecting and ignoring or forgetting is significantly different. Rejecting connotes an act of defiance with the intent of misbehaviour, whereas forgetting or ignoring hints to negligence or a lack of concern. Likely, the priests rejected the knowledge, and the people, conveniently, forgot the law to which God has given them. By forgetting or ignoring the law, they dwell in sin. You cannot forget the law and yet still be righteous. The result of forgetting the law? God says he too will forget your children. How can God forget? How can an omnipotent being forget anything? Ignoring intentionally is probably a better term here. When God forgets, he acts like they are no longer in his mind, no longer an object to his love and his guidance. How frightening is that outlook? The worse thing about this is perhaps the fact it is not said that God will ignore you – which would be logical. After all, the priests rejected him, and he rejected them. If the people ignore him, shouldn’t he ignore them? Why ignore their children in stead? This is an issue about the inheritance/generation topic in the Bible. The consequences of your sin can be passed down the generations. It doesn’t just affect you. If you ignore the law of God, God will ignore the ones you love most – your children. It’s not a whimsical thing – if the parents are unable to live a righteous life and blatantly choose to ignore the ways of truth, living in sin and shame, how would their children turn out?

Some would argue that Hosea 4:6 is part of the Old Testament Bible, prophesied at a time when Israel was nearing its destruction. It doesn’t apply to us today, we whom are saved through grace and no longer tied to the shackles of the law. I beg to differ. God is just, and his justice will prevail in a way that we as Men may not understand. Our God is a jealous God – the book of Hosea is really about faithfulness (or the lack of). All God wants is for his people to turn back to him. All God wants is for us to look at him, and exalt him as the true God. But no, his people turned against him, turned against the laws that he had given them, turned towards the gods of other tribes and idolatry, just as how Gomer commits adultery. It is a fact that we are saved due to grace, not by law, not by works. But if we use the grace of God as an excuse for us to indulge in sin, we’re deceiving ourselves and twisting the words of God. Because we are saved by grace, all the more we should desire to know God. The consequences of unfaithfulness to the Lord are the same today – even if we are saved by grace. If we choose to turn away from God, if we choose to reject the knowledge that God is the true life, we are also choosing to walk the sinful path; we are also choosing for God to reject us and ignore our children. While I do not agree that fear should be the motivation behind our faith in God, holy fear is necessary in this faith. How can you not fear God, when he is so almighty and so powerful – If you are not afraid of God, it can only mean that you do not know him enough. Yet when you know and love him enough, that fear will become dormant, hidden somewhere inside your heart, overshadowed by love and by joy and by peace. It’s rather scary if you live your Christian life radically on fear of the Lord. But, in comparison, it’s even scarier if you live a Christian life without a fear of the Lord.