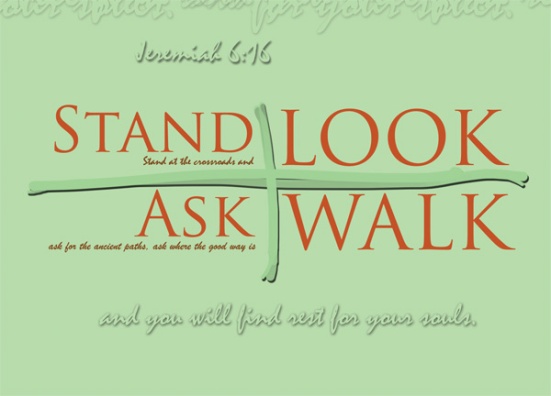 This is what the Lord says:
“Stand at the crossroads and look;
ask for the ancient paths,
ask where the good way is, and walk in it,
and you will find rest for your souls.
But you said, ‘We will not walk in it.’

This is a verse that brings out conflicting emotions in me. Firstly it is such a great and inspiring verse – a verse that points out hope, a verse that gives direction, a verse that offers comfort. All in one. Yet it is also a verse that reminds me that while God has always offered us hope and promised us a bright future, we often refuse it. We often reject him. In the book of Jeremiah the Lord has frequently called out to his people, assuring them that he will deliver them if they would just turn back – in time – to him. They didn’t, and hence they continued on the path of destruction. We have perhaps, stood at the crossroads, and we have looked. We have perhaps, asked for the ancient paths and the good ways to traverse – and yet while we know which ways are good, we refused to walk on them. That is us, is that not? The rebellious human beings, who contradict ourselves. We want to find rest for our souls, yet we refuse to walk on the path that will lead us to it.

Stand at the crossroads and look – if in your journey you come to a crossroad, what would you do? Typically, it is common sense to look up and look at the signs. Left to where, right to where. If there are no signs, it would also make sense to look far into the surroundings. Is that the place I want to go? Or is it the other way? Even if you’re in a desert and there are no signs, it is only natural that you stop and look around. You wouldn’t just pick a path without thinking at all, would you? You wouldn’t pick the first path you see without any hesitation, would you? Even if you know where it is that you want to go, you probably would still pause a while and take a look around. That’s common sense.

We have many crossroads in life. Big decisions, life decisions, small decisions that lead to big changes. Some times we’re sure where to go. Sometimes we’re not. What do we do, when we don’t know where to go?

ask for the ancient paths – it’s like, you know why cliches are cliches? They’re so old and so overused and they become cliches because they always work. We’re blessed to be born later than those before us, because we step on their shoulders, we learn from their experiences. It used to take engineers 10 years to make a little robot. Today, I’m not even an engineer but I can set up a basic robot in a couple of hours. Scientists of long ago used to spent their entire adult lives researching and discovering new knowledge. Today, we only need to spend an hour to read up on what they’ve spent their entire lives on to gain equivalent knowledge. Because we have the likes of Moses, Enoch, and Abraham, amongst tons of other Biblical role models, we can learn from them and walk in their foot steps. Because Job suffered so badly and yet conquered; we know that we can too, today. In the time of Abraham, God was already there, and the paths to God were already made. People may pass away, but God and his paths remain. Ancient or not, they still work. Old or not, they still apply.

ask where the good way is and walk in it – amongst us there are perhaps the adventurous type of people, who prefer to go around asking for advice and purposely take the opposite path as advised. It is different though, when it comes to the Kingdom of God. Let’s not be adventurous about it, because our eternal lives are at stake. Ask where the good and the righteous way is. What is the good and righetous way? Really, isn’t it Christ? He said, I am the way the truth and the life [John 14:6]. He is the good way, the best way, the only way to God.

and you will find rest for your souls – here comes the promise. We aren’t just asked to stand at crossroads like idiots. We’re also asked to look, to ask, and then to walk. We aren’t just asked to walk because there’s nothing better to do. The good way is not called the good way for no reason. It is good, because it leads us to God. It is good, because in God we can find rest for our souls. If we walk and walk and walk but never reach anywhere, never reach anywhere good, it wouldn’t be a good way. In times of suffering, perhaps our greatest yearning is just a pat on the back and a little embrace and for our loads to be taken off our shoulders. In God, this promise is held. There, we will find rest – Come to me, all you who are weary and burdened, and I will give you rest [Matthew 11:28|Article].

There is always a ‘but’, isn’t there? We humans love the word ‘but’. ‘We will not walk in it.’ Why not? Why so obstinate? Why so foolish? That’s us, isn’t it? It is one thing not to know which is the good path and thus tread on the wrong one. It is another thing entirely to know the right path and yet intentionally go on the bad one. Not the adventurous type as I’ve mentioned earlier, but the rebellious heart in us. The pride in us that disallows us to submit to God’s way, God’s will, God’s authority. Our short-sightedness which causes us to only consider the benefits of the time of our lives in this world and to overlook the greater picture, the picture of eternality with God.