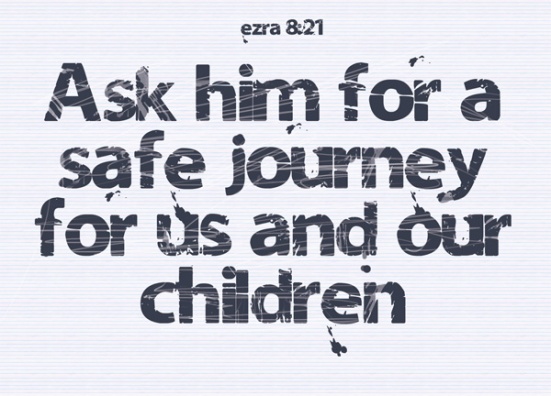 There, by the Ahava Canal, I proclaimed a fast, so that we might humble ourselves before our God and ask him for a safe journey for us and our children, with all our possessions.

Ezra may be the title character of the book of Ezra, but in truth he only appeared in the last few chapters of the book – the previous chapters were dedicated to the situation of the exiles being released to Jerusalem, and how the Lord was with the people as the temple was rebuilt. The introduction of Ezra was in line with this theme of events too. He was sent back to Jerusalem to teach the law of Moses to the people [Ezra 7:25] – an amazing thing, considering that his people has been exiled from their home city for decades. While this journey cannot be compared to the great exodus led by Moses, Ezra’s was no ordinary journey, either. Leading a group of Israelites back to Jerusalem – leaving behind captivity – they assembled by the Ahava Canal and camped there for three days before they began on their journey. What did they do while they camped there? They prayed, they fasted and they sought after the Lord. In this study we will take a curious examination at how ancient people prayed for journey safety – and on top of that, we will look at why it is important for us to pray for our little ones.

for us and our children, with all our possessions – It is interesting to note what was specifically mentioned in Ezra’s prayer – us, our children, and all our possessions. Praying for the safety of possessions is understandable, as objects can as easily be lost, stolen, or blown away by the wind in a journey. Objects do not have the ability to pray for themselves. But why the specific separation of ‘us’ and our children? Why not pray for our elderly, our leaders, our mothers, the sick, the weak, the crippled? Why just the children?

I will admit that I’m not the fondest person of children, but I don’t mean to be condescending when I say that I believe that it is the responsibility of those who are older to be praying for those who are still young. ‘Child’ is a very subjective title – if you are ten, you are responsible in praying for those who are five. If you are five, and if God so blesses you and you know how to pray, then pray for yourselves and those younger than you. Yet, for those of us who are too old to be considered children, let us pray – for ourselves, of course; for our possessions – which God had blessed us with, of course. But most importantly, let us pray for our younger ones. We are responsible for them – especially when they are yet to mature physically, emotionally and spiritually, and when they still don’t know what to pray for. Let us pray for their safety; let us be an example to them.

For example, if you are going to cross the road with a four year old boy – would you cross the road when it’s a red light? You probably wouldn’t, even if there are absolutely no cars about. Not because of anything, but just in case the boy learns that and misjudges the status of the incoming cars when you’re not around. You would probably even hold his hand when you cross the road – not because of anything, but for the comfort of the young one, for whom the roads are treacherous and scary. In my country there’s a cute little habit where little kids are taught to raise their right hands when crossing the road. You might even do that too, despite your embarrassment, for the sake of the little one. It’s the same logic, isn’t it? Pray for our little ones – especially when they do not yet know how to pray for themselves; especially when they are still not old enough to be responsible for themselves.

a safe journey – we often pray for journey safety these days, don’t we? I don’t know about you, but I certainly do – whether it’s a flight round the globe or just my routine train ride to school. Well, thousands of years ago they were also praying for journey safety, though perhaps in a very different sense. In this verse we will take a look at this difference and also consider the Importance of leaving our journeys and our little ones in prayer- in God’s hands. When Ezra prayed for journey safety, he was also asking for direction and guidance. In those days there were many roads and there certainly weren’t many maps. Even if they had maps, it would be incomparable to our digital maps today that are so easily updated and accessible. Perhaps praying for direction wasn’t a merely physical thing, but also spiritual direction. If anything, technology certainly hasn’t eased our need to pray for spiritual guidance.

I imagine that praying for journey safety also meant asking for direction from bandits, criminals, and accidents. In the next verse we are told of the enemies on the road, which could usually be safeguarded from with soldiers and horsemen. Ezra concluded that the hand of God is greater, and chose to pray and trust in the Lord instead of depending on men. Today, while threats from ‘enemies on the road’ are still very real, we do have new concerns – the advent of technology has also meant that roads are more dangerous today. Mobil accidents rank high up the list of death causes. Even if you escape death, you are unlikely to escape the plight of permanent injuries or scars from an accident.

One of my friends happened to be in Boston for work and got embroiled in the lockdown last week. She never expected such an adventure, being so accustomed to the regular long flights around the globe that she has to take. Eventually, she and her colleagues ‘fled’ Boston despite the emergency stateThis is perhaps a slightly extreme example. She lives in a city 12 hours away from Boston. If not for that trip, she would be safe and far away from it.

I proclaimed a fast, so that we might humble ourselves before our God – Do you take your journeys for granted? Do you take traveling for granted? Maybe you travel in and out of the city so often that you are used to the rigor, and you no longer think much of it. Perhaps you are so used to your everyday 20-minute drive to work that you no longer pray for safety. Ezra’s journey was a significant one – one that could almost symbolize the return of the law of Moses to Jerusalem. Yet in our own journeys – our everyday, routine and standard journeys, we can seek God’s protection too. For ourselves and for the little ones. Physical journey, emotional journey, spiritual journey – this entire life journey, perhaps. Let us learn from ancient Ezra, how to pray for safety in a journey. Well, it may not be in the form of a fast, but let us humble ourselves down before our God and know that he reigns sovereign.