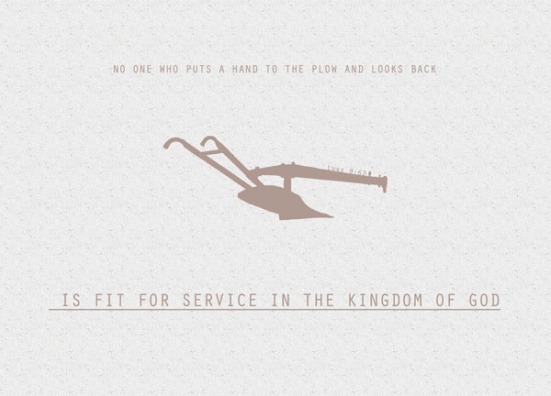 Jesus replied, “No one who puts a hand to the plow and looks back is fit for service in the kingdom of God.”

The final few verses of Luke 9 records how Jesus addressed those who wanted to follow him, but didn’t respond appropriately to the call. There were three men mentioned in the passage from Luke 9:57-62. One was passionate but blindly so, failing to understand the cost of following God; one was resolved but begged for a delay, failing to understand God’s timing; and the third was willing but unable to let go; failing to understand the magnitude of God’s work. In today’s study we will focus specifically on Jesus’ response to the third man, who said, “I will follow you, Lord; but first let me go back and say good-by to my family.” [Luke 9:61], looking especially at the wider context of God’s kingdom and how necessary it is that we learn to let go and put God first.

No one who puts a hand to the plow – It took me a while to realise that ‘plow’ is ‘plough’, but even so, as a modern city kid who had never been to a farm or the like, ploughing is an activity that is very foreign to me. As far as my limited understanding of ploughing goes, it is one of the most basic instruments to farming for much of history; and it basically is meant for cultivating the soil – one of the first steps before you plant anything. In more modern times ploughs are probably machines or run by tractors; but back in the old times they were pulled by animals like oxens, bullocks or horses. If we go back even further, the very first ploughs were totally reliant on men. In the context of this verse at least, ploughs should already been pulled by animals, since in Elisha’s time they were already using oxens to pull their ploughs [1 Kings 19:19].

Even so, ploughing is a tough job. I imagine it to be, at least. Who are the ones who puts their hands to the plough? Anybody – or everybody, basically. Every Christian. Everyone who is doing God’s work. It is very demanding – the moment you put your hand to the plough, you’re counted. The moment you step into God’s ministry, the moment you desire to do God’s work, you’ve committed yourself. It’s not when you’re deep in the middle of the field and having ploughed half the land. No, ploughing is very beginning of farming – way before harvesting, even before sowing the seeds. From the very beginning, the demands are there.

and looks back – one of the most famous examples of ‘looking back’ in the Bible is Lot’s wife [Gen 19:26]. Granted, that was a very literal example – she literally did turn her head and looked back – but more than just the literal gesture itself, it was a notable sign that she was unable to let go of the past, a past muddled in sin. She turned into a pillar of salt as a result of that. Looking back doesn’t mean you return to the world of sin, but it is a reluctance to part from it. From ploughing, from the very beginning, you cannot look back. You are not to look back. Do not let yourself get distracted by worldly concerns. Don’t miss your own life. Don’t put anything before the Lord.

It is very demanding. By worldly practice, it’s probably not a big deal if you turn your head back and allow yourself to get distracted while your hand is on the plough – not if you haven’t started ploughing yet. Comparatively, when you begin to plough, you will certainly have to keep your eyes affixed to the front lest something goes wrong and the soil is marred and all your plans to sow seeds and to harvest them go down the drain. It is a task that demands your full attention. But, what before you begin to plough? When your hand is just on the plough?

I think when Jesus said ‘puts a hand to the plow‘, it  really just means when you are ploughing, but I just wanted to play on the words a little. The moment you’ve decided to follow Christ, don’t look back – even if you haven’t started doing anything concrete yet.

is fit for service in the kingdom of God – we cannot serve God and our own interests at the same time [Matthew 6:24]. We cannot claim to be concerned for God’s work when we’re still distracted by our own worldly lives [James 4:4]. I’m not saying every Christian should become a monk and lead secluded lives in the temples and churches. But in our own work, in our own families, in our own societies, let us find the kingdom value in whatever we are doing. Let us not do things purely for our own sakes, let us not seek self-interest at the price of God’s interest. Let us redefine our allegiance to God.

When God calls us, let us be ready to say ‘yes’. Know what is at stake – nothing worldly, but for the glory of God. Often we think we’re doing God’s works already when we serve in Church and go for the occasional mission trip. Yes, but not quite. Are we the same in church and at work? Do we behave the same way, say the same things, think the same thoughts? Or is our work life nothing to do with God at all – is there no kingdom value in it at all?

Not fit for service in the kingdom of God. That’s harsh. But that’s all of those who asked to follow Christ. That probably applies to most of us too. Let us learn to redefine our allegiance to God in everything that we do.