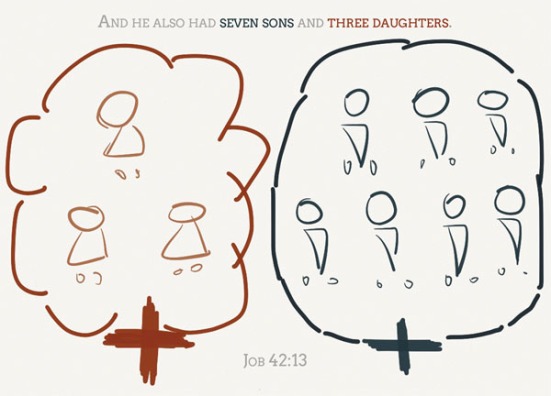 And he also had seven sons and three daughters.

We were told right from the beginning his original possessions and wealth – and he owned seven thousand sheep, three thousand camels, five hundred yoke of oxen and five hundred donkeys, and had a large number of servants. He was the greatest man among all the people of the East [Job 1:3]. We know that he lost all of that, first his oxens and donkeys [Job 1:14-15], then his sheep [Job 1:16], and his camels [Job 1:17]. At the end of his suffering, we are also told that he was blessed with exactly double of what he originally had – The Lord blessed the latter part of Job’s life more than the former part. He had fourteen thousand sheep, six thousand camels, a thousand yoke of oxen and a thousand donkeys [Job 42:12]. There was one more blow that Job was struck with in the first wave of sufferings – before his personal, physical pains came – also a possession, also a blessing, but perhaps in far greater significance than the livestock. His children – He had seven sons and three daughters [Job 1:2]; lost them all [Job 1:18-19], and all the end of his suffering, he was given 10 children – in the exact same ratio of male to female as before – And he also had seven sons and three daughters [Job 42:13].

Have you noticed something strange here? Yes, Job was blessed again with children – but it was basically the same. While he had double the number of oxens, donkeys, sheep and camels; he was only given 10 children, not twenty, at the end of the day. Granted, it was specially noted that his daughters were so beautiful and they were even named in the Bible – not because they were exceptionally notable, but because of God’s overflowing blessings to their father. But why not twenty children? Wouldn’t that be a more complete and exact fulfillment of God’s double portion of blessings to Job [Job 42:10]? Was it just not possible for Job at his age to gain that many children? Or was twenty simply practically impossible – as highly unlikely as this sounds, for Gideon alone had seventy sons [Judges 8:30]. Or was God simply inconsistent and the Bible was inaccurate when it noted in Job 42:10 that God gave him twice as much as he had before?

I brought this question up because it sheds some light to a very important theological concept – that there is eternal life in all who believe. Job’s ten original children did not just disappear when they die. Their names were not erased from their family book, their memories and names were not erased from the minds of their parents and from the minds of those who knew them. Likewise, if a woman had a stillborn baby 5 years ago, and she gave birth to 3 other children later on in life, she would most likely call the those three ‘my second, third, and fourth child’; remembering the one who died an infant as her first. Yet as Christians we believe that what remains is not just our memories of the deceased, but that when they die, they merely cease to exist in our world – they continue to enjoy eternal life in the courts of God and one day we will be reunited. Apply this to Job’s case and hey, many many years later, when Job and all his children had died, the entire family will be reunited in heaven – Job with all twenty of his children!

After Job had prayed for his friends, the Lord restored his fortunes and gave him twice as much as he had before [Job 42:10]. This verse stands true. It was exactly double the blessing in terms of his oxens, donkeys, sheep and camels. Likewise, it was exactly double the blessing in terms of his children. It is crucial that we believe and understand the concept of eternal life or we will fail to recognise that Job had indeed been doubly blessed in terms of his children. And when we recognise that there is eternal life, and that the ten children did not cease to exist, but merely has gone on first to be with the Lord – then the difficult question of the personal injustice to Job’s first ten children will begin to be resolved. Why them? Why did they have to suffer as a result of a ‘bet’ between God and the devil? Why did they have to suffer just because their father was the most righteous in the land and was chosen to be made an example of? If we merely think in our limited time and limited humanity, it is unjust indeed. And while I don’t think we can ever explain the justice of God, and while I don’t think God owes us an explanation, I believe that understanding the concept of eternality will resolve a lot of questions about this perceived injustice.

Are we always blessed at the end of our suffering? Will we be doubly blessed, as Job was? I don’t know – this is another issue in the concept of suffering altogether, and as much as Job was doubly blessed, there are many names I can think of in the Bible who didn’t live to see the blessings that God had provided for them or for their descendants. There were many who didn’t live to see the deliverance that God promised. Yet in today’s study I think an important point was examined. That God makes good his word. He promised double the blessings – and double did Job receive. At first glance it may seem as if he didn’t receive double the blessings in terms of his children, but when we learn to appreciate the concept of eternal life, we can be certain that it was double blessings indeed. Let us learn to open our eyes to the greater concept of eternality, so that we’ll be more receptive to the blessings that we once failed to recognise.