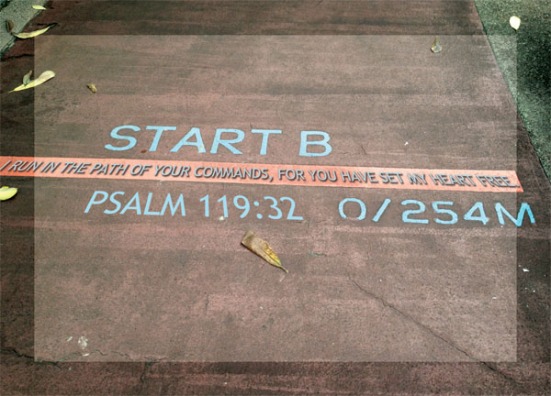 I run in the path of your commands, for you have set my heart free.

Psalms 119 is the longest chapter in the Bible, notable for its 22 parts of 8 verses each. The fourth part begins with the alphabet Daleth, and consists of the verses from Psalms 119:25-32, with a general theme of understanding God’s precepts. In today’s study, referring strongly to the imagery of running, we’ll look into how exactly running in the path of God’s commands will set our hearts free.

I run – Do you run? Well, have you tried running before? Not running desperately after the bus or because you are late for an appointment, no, not that kind of running. Not running on the treadmill too. Have you ever run around the park or in a grassland leisurely, feeling carefree, feeling awesome, feeling like all your worries had disappeared? I run every morning, and that’s exactly why I do. I think that’s exactly what the Psalmist meant in Psalm 119:32. The psalmist didn’t use the verb ‘walk’, but instead the more animated, more emotive, and stronger ‘run’. When do you run? When you chase after a bus. When you’re late for work. When you’re a police officer and you’re after a criminal. Or when you’re simply happy, with boundless energy and overflowing joy, and you express it by running, like a child. The run in this verse seems more like the last scenario. There’s a strong hunger for God’s commands that can only be satisfied by pursuing it relentlessly.

you have set my heart free – it is notable that the NIV version is distinctly different from the rest, which are largely along the lines of – for you will enlarge my heart – instead. It’s very vague though, isn’t it? There are many possible interpretations for this, but I personally understand it to be an increase in our awareness and knowledge of God, which broadens our understanding and fills our heart. When we learn more about God, his ways, his words, his character; we learn more about his love for us – for God is love and he loves us unconditionally. And when we learn more about his love for us, we will learn to love God more. When we love God more, we will learn to prioritise him more, and when we become concerned for the things that he is concerned about, we will no longer be of the world, and our hearts will be less distracted by our difficulties in life, our successes and our failures, our jobs and our studies; our wealth and our statuses. As we learn to prioritise God more, we will yearn for his word more, we will yearn to be in his presence more often – the Spirit will fill our hearts, and our hearts will be overflowing with joy and peace, and we will walk in his path, no, we will run in his path freely.

You know, I jog every morning. The picture today is of the track that I run on daily in the little park that I go to each morning – the little park just across the street from where I live. There are plenty of reasons to hinder me from being able to jog every morning – for instance, the haze is too bad this morning so I’m just holing myself up in my room now. Or sometimes I may need to work. Or I may need to be in school. Tons of reasons. Tons of distractions. Isn’t it similar to running in the path of God’s commands? We have many distractions, many temptations, many excuses that will refrain ourselves from running on the path of God’s commands. Even if you’re running, you easily get tired out, and you begin to walk, no? Paul often likened the faith to a race, and in his imagery of a race, it’s often about athleticism, about  self-discipline. This verse speaks about something greater than discipline. That’s love, that’s joy, that’s peace. If something sets your heart free, won’t you feel happy doing it? Won’t you love doing it? Won’t you gain a sense of peace when doing it? Won’t you keep wanting to do it, again and again, naturally without the need of reminders, without much effort, without being distracted?

Oh well, the haze in my city has reached the hazardous level, and hence I’m certainly not going to go for my morning run tomorrow too.