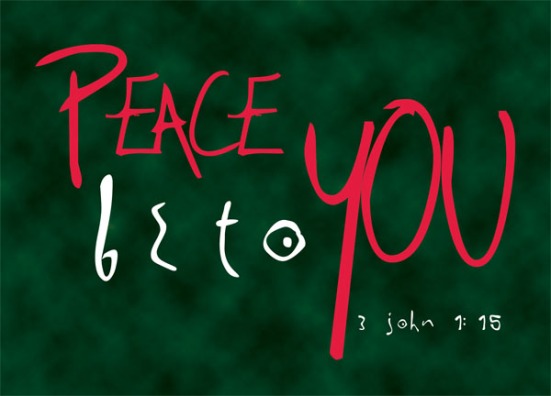 Peace be to you. The friends greet you. Greet the friends, each by name.

Before you frown and refer to your Bible in a hurry, let me first clarify that in my Bible, there is no 3 John 1:15. If you’re using KJV, or NIV or ASV and some other versions, you won’t find this verse number in your Bible at all – and in all likelihood, there won’t even be a footnote that tells you that other versions of the Bible have a 3 John 1:15. Missing verses in more modern versions of the Bible are not an uncommon thing – there are more than 10 in the NIV alone, but most of them happen in the middle of other verses, and they usually disappear entirely. For example, let’s refer to Acts 8:37, which was left out entirely by some modern versions. It’s not an irrelevant verse, but apparently scholars believe that this verse is highly likely to have been added in at a later time, and is not originally in the Bible. This is based on Greek manuscripts that have been found in recent times. That’s fine and fair and people like to talk about conspiracy theories regarding that, but let’s not go so far. I’d talk about conspiracy theories if my Genesis 1:1 [Article] is missing. Anyway, there is a distinct difference between the type of missing verses like Acts 8:37 – which most of the missing verses are like; and 3 John 1:15. While the verse number 3 John 1:15 doesn’t exist in versions like KJV and NIV, the content of the verse itself exists and isn’t missing – it was simply combined with 3 John 1:14. Furthermore, while NIV can be considered a modern version, KJV most certainly cannot. This is not a matter of the time frame. This is simply a numbering convention difference; which is strange. It’s perhaps just more interesting that this verse happens at the end of the chapter, which makes it impossible for one to notice unless you have two parallel versions.

This is the gist of the controversy that surrounds this simple verse of final greetings. There’s pretty much a verse like this in at the end of most of the New Testament letters. I cannot deny the fact that I’m quite fascinated with things like these – I use a parallel Bible of two different languages, and when one has a verse 15 and one doesn’t, it’s painfully obvious to me even if it’s in a rather obscure book like 3 John. Yet while my fascination over the numbers led me to study this verse in greater depths, the meaning in this verse should not be marred by all the speculation and controversy that surrounds it.

Peace be to you – The author of 3 John only refers to himself as the Elder, but most scholars believe that the book was written by the apostle John due to the consistency of the language and style used to the two other epistles of John, and also due to the similarity in language and concept to the gospel of John. This letter was written to a man called Gaius, a man who walked faithfully in truth [3 John 1:3], a man whom John loved [3 John 1:1], and a man who was likely once a student or disciple of John’s [3 John 1:4]. Other than that, we do not know much about Gaius – there were other instances when a man named Gaius was named in the New Testament, but there has been no evidence to suggest that these were all the same man.

Yet John wrote this letter clearly to commend and encourage Gaius, and in his salutations, and it was Gaius that John first salutes as he ends his letter.

The friends greet you – it has been widely speculated that John wrote this letter from Ephesus, and if that’s the case, then John refers to his friends in Ephesus, who had either heard about Gaius from John, or who were already acquainted with Gaius, seeing as how believers came and testified about his faithfulness to the truth [3 John 1:3].

Greet the friends, each by name – and this refers to the people who are with Gaius. We do not know who are they, or which city they could possibly be in, but this is in general, a very common greeting reserved specially for letters. Hebrews, 1 Peter, and every single letter of Paul had something like this. Paul always used ‘grace’ as a final blessing, but he often had huge chunks of names which he pointed out to greet or to help send greetings for. Though John did not list the names out one by one, and perhaps if he had done so we would have known a little bit more about Gaius, but essentially that was what he was asking Gaius to do on his behalf – a personal greeting for each of the friends who are with you, and whom walk in this faith together with us.

John couldn’t write a letter to each and everyone of them, just like Paul couldn’t write a personal letter to every single one of them. But by pointing them out, by greeting them personally, it was in essence, akin to them having a share in the thoughts that John had for Gaius. Sure, the apostles had the apostolic authority at that time, and with the baptism of the Holy Spirit they were filled with apostolic power as well. Yet I would like to think that it is also this sensitive and caring side of theirs – that would see them write letters to people like Gaius and Philemon, and address their brothers and sisters in Christ one by one, by name. They had a very strong personal relationship with the believers, even if they were not always around. That, on top of the miracles that they performed and the substance of their preaching, must have made a difference.