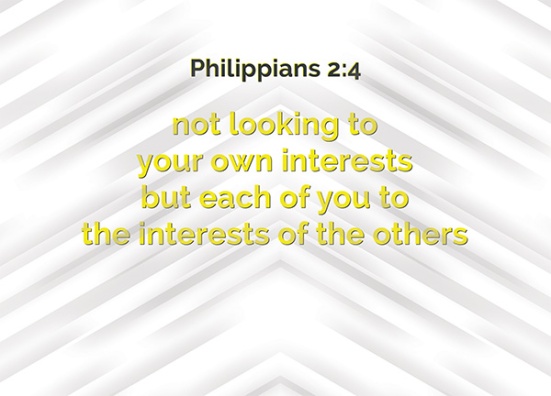 After a powerful exhortation to stand fast in the faith and advance the gospel in chapter 1, Philippians 2 continues with an exhortation to the importance of unity, and how this unity in Christ can be maintained by following Christ’s example of humility. In today’s study, we will focus specifically on the idea of humility in reference to this verse, an idea which is often trampled on in our very material and practical world today. My way, their way or God’s way? My interests, their interests, or God’s interests?

self interest vs interests of others

There is a Chinese idiom that says, Every man for himself, and the Devil take the hindmost and it basically means that if you don’t look out for yourself, the heavens and the earth will combine to destroy you. I’ve always felt that this very adequately represents the world we live in today. This every man for himself mentality is so strong in society today that we can often see semblances of it even in Church. Is it wrong? Sometimes its a fine line between selfishness and self-preservation. Is Paul saying that we shouldn’t protect our self-interests? Are we to allow ourselves to be abused by others? Or even in terms of altruism – how altruistic can we be? One of the favourite debate topics when I was still schooling was – is there true altruism? And to be honest, it was always easier to form an argument for the opposition team than for the preposition. Where do we draw the line? What do we do when the line gets blurred between love and foolishness?

Let me use a very everyday example from my life. Our campus has a limited amount of hostels available, and in order to be eligible for it, you need to amass a certain amount of hall points, which can be earned by holding executive-committee positions in clubs. Most of the time, when we interview students for an ex-com position, we all know that they’re here because of the hall points. Yet we still ask them why do they want to be in the ex-com, and they still tell us about reasons unrelated to hall. Are they lying? I’d like to say most of them aren’t. Whether earning the points is the main reason why they want to be in an ex-com, we believe that there are other reasons as well. It is not wrong to enjoy the hall points as a result of your hard work in your duties as an ex-com member. But it gets annoying when people join just for the ride so that they can get the hall points and do not put in effort for anything much.

It takes a lot of humility to be able to honour somebody above ourselves [Rom 12:10] and to seek the good of others more than of our own. And it takes a lot of discernment to know when to draw the line between humility and foolishness – Be very careful, then, how you live—not as unwise but as wise [Eph 5:15]. Perhaps our best example can only be Jesus Christ – who humbled himself down and, not for his own interests, but for ours, died on the cross. Most of us probably won’t die for others – but in our own small little deeds, let us work on looking out for the interests of others, for God’s kingdom sake.

One thought on “Philippians 2:4”