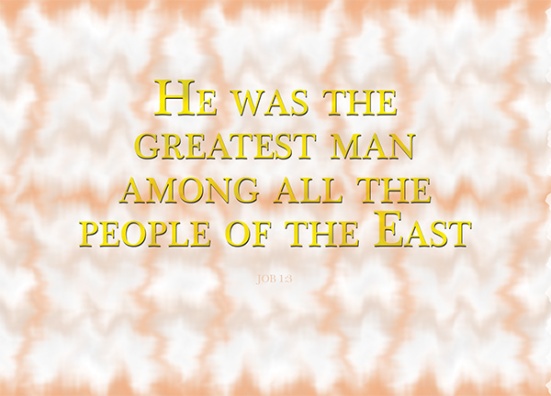 and he owned seven thousand sheep, three thousand camels, five hundred yoke of oxen and five hundred donkeys, and had a large number of servants. He was the greatest man among all the people of the East.

Was Job a historical person or a fictional person? Was the story of Job simply just a piece of historical fiction (using a real historical figure but with a fictional story). The story of Job is a dramatic one and one with immense literary value. The likes of Victor Hugo and Tennyson reserved huge acclaim for this book. It’s a book that weaves between the narrative and the poetry very beautifully and also a highly intellectual book talking about several extremely wise and experienced men debating on the topic of suffering at a time when there was no Bible. There’s a lot to learn from the book of Job. When we spend time studying and reflecting it, we will come to learn more about God, more about Men (and ourselves), more about Satan and more about Suffering. But before we dive into this extremely difficult book, we need to first understand this man called Job. In the first verse of Job we were told his name, his origin and character, in the second verse we were told about his offspring, and in this verse his possessions. In this study, we will look at how his possessions – and that he was the greatest man among all the East – meant anything in his subsequent reaction to his suffering.

and he owned seven thousand sheep, three thousand camels, five hundred yoke of oxen and five hundred donkeys, and had a large number of servants – once upon a time, the wealth of a man was not measured by the money he had but by the amount of cattle he possessed. That was the case in Abraham’s time as well – In this way the man grew exceedingly prosperous and came to own large flocks, and female and male servants, and camels and donkeys [Gen 30:43]. In other words, Job was rich – very very rich.

Verses 1-5 of Job 1 depicted how great Job was – his earthly record. Verses 6-8 goes up a notch, using the same terms as his earthly record, but this time, it was a heavenly record. God’s personal vouch of the character of Job, his personal compliments and praise to the goodness of Job. Put these two records together and we as the readers are given a very flawless image of Job right from the very beginning of the book. Before we even know what is about to befall him, we are expecting something dramatic – nothing short of the high expectations that have been set by such a glowing reference to Job. The story didn’t disappoint – it was so sensational that if such a thing ever happened today, when the greatest man amongst the greatest suddenly suffered such tremendous afflictions out of the blue, I’m sure all the world would be stunned – all news agencies, papers, channels, websites will be bursting with discussion about it.

The greater you are, the greater the impact of your fall when you’re thrown down to the ground. Yet Job was victorious. His lost his possessions, but his life and faith was not based on his possessions, but on God, and he was still able to worship God despite his shame and grief. That’s just amazing. That’s really something that befits the greatest man of the East.