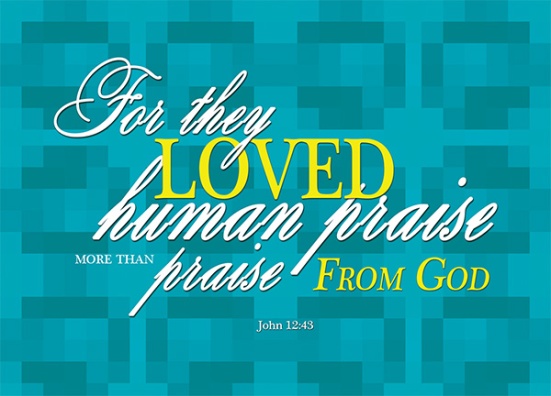 for they loved human praise more than praise from God.

Jesus performed so many signs, that many people believed him. But a lot of these people were afraid to openly acknowledge their belief, because of the power of the Pharisees who were among them. They were afraid of being persecuted and scorned by the Pharisees, who will lead a huge group of Jews against them. They desired human praise more than praise from God. In this verse Jesus laments the short-sightedness of men as we fail to see which is more important – praise from men, or praise from God. In this study we will compare the two types of praises using various examples from the Pharisees, to the apostles, to Job.

for they loved human praise – Who doesn’t enjoy being praised by men? Well, most people do. It means a lot to be praised by men of regard, men of consequence. It means a lot to be praised by your parents, your leaders, your superiors at work. Most people would be proud of a war medal, a sporting medal, a plaque of courage. Many people will revel in the applause and ovation of a theatre, most would be excited to have the honour to speak to a Queen. It is natural. We’re not talking about flattery, which is meaningless praise and has no substance or consequence. We are talking about praise that you’ve earned, praise that you truly deserved, praise that affirms and encourages you.

Is it wrong to enjoy praise from men? I don’t think so – at least, I don’t think this is what this verse is trying to put across. It would be very harsh to expect us to not feel pleased when being praised of something we’ve truly worked hard for. But how much of our hearts do we pour into the praise of men? Do we hang onto them so desperately that, if we are without praise, we waver and we decline? Do we desire praise so much that we lose sight of more important things? Do we love the praise from men more than the praise from God? No, a person is a Jew who is one inwardly; and circumcision is circumcision of the heart, by the Spirit, not by the written code. Such a person’s praise is not from other people, but from God [Rom 2:29]

more than praise from God – There is a significant difference between being praised by men – no matter how royal, how great, how esteemed, and being praised by God, who is surely more royal, greater, and far more esteemed. In Job 1 we see a close parallel between Job’s record on earth and Job’s record with God. Job 1:1-5 recounts Job’s earthly record and concludes that He was the greatest man among all the people of the East [Job 1:3|Article]. If that is not high praise, I don’t know what is that. Immediately after that, though, we hear God’s praise of Job from God’s own mouth – Have you considered my servant Job? There is no one on earth like him; he is blameless and upright, a man who fears God and shuns evil [Job 1:8]. God confirms and affirms Job’s earthly record. Men had praised Job, but all that huge words would have counted for nothing if Job was not regarded by God. And even if Job became slight in the eyes of men – he never did, though, as long he was still esteemed and honored before God, that was surely more than enough. . I do not accept glory from human beings, but I know you. I know that you do not have the love of God in your hearts. I have come in my Father’s name, and you do not accept me; but if someone else comes in his own name, you will accept him. How can you believe since you accept glory from one another but do not seek the glory that comes from the only God? [John 5:41-4]

But in reality, it is hard. Job didn’t hear God’s beautiful description of his character, and neither would we ever. We need to believe that we are honored by God when we duly act according to his word. We need to understand and expect that by confessing that Christ is our Lord and saviour, we run the risk of losing our earthly praises, ranks, statuses and esteem. We will, more likely than not, fall into disgrace, scorn and contempt of men when we act according to God’s will and word. Instead of being praised, we would be scorned; instead of awe, we will hear mockery. It is easy, then to deny God, to refuse to confess Christ, to reject God just for the sake of retaining those human praises that we so desperately need. Or perhaps we will fall into the trap of pretension, much like the Pharisees, who pour their monetary offerings slowly so that everybody in the temple will hear and know how much they are offering. They love the most important seats in the synagogues and respectful greetings in the marketplaces [Luke 11:43]. They act according to God’s words, maybe, but for their own pride’s sake. Be careful not to practice your righteousness in front of others to be seen by them. If you do, you will have no reward from your Father in heaven. So when you give to the needy, do not announce it with trumpets, as the hypocrites do in the synagogues and on the streets, to be honored by others. Truly I tell you, they have received their reward in full [Mt 6:1-2].

Paul reminds us strongly – Am I now trying to win the approval of human beings, or of God? Or am I trying to please people? If I were still trying to please people, I would not be a servant of Christ [Gal 1:10]. The apostles were not looking for the praises of men, but it is amazing that when you do not seek it – We were not looking for praise from people, not from you or anyone else, even though as apostles of Christ we could have asserted our authority [1 Thes 2:6] – you get so much more. Even in their own time, the apostles were highly esteemed within the Church. Of course, they were scorned by numerous people and persecuted up and down; but in the two thousand years since the resurrection of Christ, numerous people must have praised the apostles, be thankful to God for the apostles and for what they’ve done for the kingdom of God. They may not have lived to see their legacies, but surely their praise and assets in heaven are far greater than the sufferings that they had endured on earth.

It’s okay to love human praise. But remember, it is not the praise of men that matters. It is the praise of God. Let us learn to seek and love the praise from God so much more.