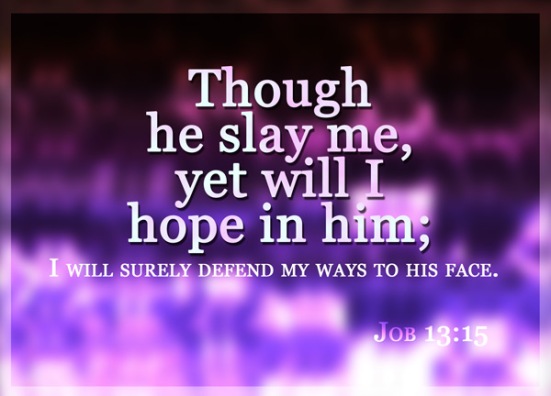 Though he slay me, yet will I hope in him; I will surely defend my ways to his face.

Job 13:15 may seem like a dubious verse at first glance, a verse that may seem to speak negatively about God – but I personally prefer to see this as a great verse in which Job declares his faith. By chapter 13 we are already 10 chapters into the discourse between Job and his three friends – it has been 10 chapters since Job first spoke up about his misery. 11 chapters since Job declared, “shall we accept good from God, and not trouble?” [Job 2:10|Article] and 12 chapters since we’ve read, “Naked I came from my mother’s womb, and naked I will depart. The Lord gave and the Lord has taken away, may the name of the Lord be praised [Job 1:21]. Since then, there has been a lot of complaining, a lot of self-righteous moaning, a lot of questioning, a lot of wishing to be dead. At first glance, Job 13:15 may seem to be one of them, after all, it comes straight after Job had just gave his three friends a piece of his mind with rather harsh words – your maxims are proverbs of ashes, your defenses are defenses of clay [Job 13:12|Article]. In this study, we will example the faith that is behind this declaration – a faith that is not dependent on gifts, or blessings, or anything else.

though he slay me – or, even if he slays me – even if he allows. Job knows that this is out of God. He doesn’t blame anyone else – he doesn’t blame the people around him or the circumstances – he has never once uttered a word of hatred against the Sabeans or the Chaldeans, but they were the ones who killed his servants and carried away his cattle. He has not once complained about the untimely mighty wind, that destroyed the house his children were feasting in. No, he knew these were allowed by God, he knew that God was the ultimate one in control, and he only ever focused his questioning on God.

When Daniel’s three friends were threatened to be thrown into the furnace, this was what they said: But even if he does not, we want you to know, Your Majesty, that we will not serve your gods or worship the image of gold you have set up [Dan 3:18|Article]. Even if God does not deliver us this time, we will not bow down to you. Even if God does not, our faith will not be shaken. In essence, this was what Job was saying as well. I know that God is behind all this – but even if he gives me the final blow and takes away my life, my faith will not waver.

Amazing. What a slap in the face this must be to Satan, who all but disappeared after delivering the second attack on Job. Satan was the one who claimed, “Skin for skin! A man will give all he has for his own life. But stretch out your hand and strike his flesh and bones, and he will surely curse you to your face.” [Job 2:4-5]. Satan must have been utterly screaming in defeat when Job said this verse. Satan was determined to prove that mankind’s submission of God was only because of the blessings that God has given them. Job, by continuing to trust and depend on the Lord in his suffering, had proven Satan wrong.

yet will I hope in him – Job knows God well, because he maintained a close walk with God in good times, he was able to remember and cling on to his understanding of God even in bad times. And hence, he finds himself unable to turn anywhere else except towards God, because he knows that there is simply nowhere else to turn – his only hope for deliverance is in God. His faith is like a roly-poly toy – a toy that rights itself when pushed over. Shove it, pushed it, hold it down for a long time and let go – but it will always right itself at the end of the day. Job’s faith was just like that.

I will surely defend my ways to his face – Job believes that by coming before God, he will be finally proven innocent – indeed, this will turn out for my deliverance, for no godless man would dare come before him! [Job 13:16]. His faith is not only in God delivering him from his misery – he also staunchly believes that God will clear his name. He was not the sinful, wretched and godless man that his three friends had claimed him to be, and he believed that God will prove that for him.

The book of Job is not the friendliest read in the Bible. Well, the first couple and last couple of chapters are surely fine, but between that consists of an incredibly long, repetitive, negative debate between the three friends and Job, and most of their words contain so much hyperbole and accusation that it’s really not very nice to read. However, if we take the time to digest the book of Job bit by bit, verse by verse, we will find that every single verse – even in the middle chapters can teach us so much about faith, about suffering, about God, about ourselves. Job was in an unbelievably unfortunate circumstance, and while bearing the emotional and physical pain, he was in the middle of an extensive debate about his own integrity and the nature of God with a bunch of fellow esteemed intellectuals. Well, he was certainly very self-righteous, and he had certainly been too harsh in his words more often than not, but one thing is constant – his faith never failed. Everytime he got too negative, everytime he got too upset, he will return back to God with a sudden declaration of faith.

I don’t know what bad things happened in your life recently, but won’t you still hope in him?