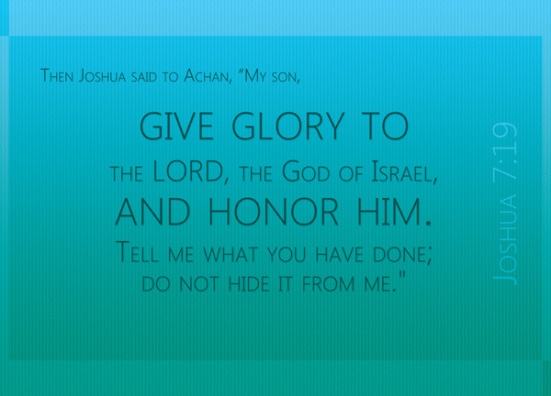 Then Joshua said to Achan, “My son, give glory to the Lord, the God of Israel, and honor him. Tell me what you have done; do not hide it from me.”

Achan is a Biblical character so obscure that not many of us can recall who he is without being given the background of the circumstances then. After a series of victories that climaxed with an amazing victory at Jericho in the first six chapters of the book of Joshua, which ends with the conclusion that Joshua’s fame rose as the Lord was with him – we see, suddenly, an abrupt defeat – a surprising defeat, by Ai, a city actually smaller than Jericho. What happened? We’re told clearly that it was because some in Israel had sinned venomously against God – namely, Achan. The entire process of identifying who the culprit one was puzzling, and reminds us of how the Lord led Samuel to pick Saul and David as kings later on in the history of Israel. However, our focus today is not on the sin that Achan had committed, nor the way the Lord induced Joshua to identify him or the punishment meted out to him. Our focus today is on the simply interrogation of Joshua, that has a connotation far more wide-reaching than we realise at first glance. To give glory to God and to honour him are two very very fundamental concepts in Christianity. If you are familiar with the Shorter Catechism, the very first thing in it is to define the chief end of man, which is to glorify God. There are tons of verses, in all aspects of the gospel, about Christian living, verses that extol the Lord – that shouts out this concept to us. It’s thus a concept that’s very much ingrained in our Christian hearts. In today’s study, we will examine the words used by Joshua to induce a confession out of Achan, and discover the depth of these words beyond the way they are usually applied in our lives today.

give glory to the Lord, the God of Israel – To give glory to God, or to extol God for his glory, is an idea that can be commonly found in many verses – So whether you eat or drink or whatever you do, do it all for the glory of God [1 Cor 10:31]. Declare his glory among the nations, his marvelous deeds among all peoples [Psa 96:3]. From Isaiah we know that we are created for the glory of God – everyone who is called by my name, whom I created for my glory, whom I formed and made.” [Isa 43:7] However, when Joshua prompts Achan to give glory to the Lord here, it is clearly a solemn charge to tell the truth. Basically, what Joshua is saying is, Achan, come on, boy, tell me the truth. After all, who do you think you’re hiding things from? The Lord, the God of Israel, the God of your forefathers – he knows the truth. So do not smear and taint his glory any longer by lying and withholding the truth.

and honor him  – Or, in others words, confess to God. At this juncture, there was only one thing Achan can do that qualifies as him honoring God, or giving God praise, and that is to make a confession to the Lord. After such a scene, there was really no lie or excuse Achan can give, can he?

A lot of times we think that to glorify God, we should do good. To honour God, we should do what is right. That isn’t wrong. Totally important, for sure. But sometimes we place too much focus on doing more good things and doing better things that we forget to check ourselves along the way. Sometimes we come to a juncture where by, even if we do good, we cannot really glorify God anymore. God isn’t pleased anymore. We do not feel his presence with us anymore. Sometimes it’s simple – let us go back to what we have done, and give the Lord the glory he is due by revealing the things that we have done when we thought nobody was watching.

This solemn charge is passed down the times, and John the Apostle records an incident where by the Chief Priests and the Elders of the Sanhedrin used this charge on a man, who was blind from birth, but healed by Jesus – A second time they summoned the man who had been blind. “Give glory to God by telling the truth,” they said. “We know this man is a sinner.” [John 9:24] Essentially, they were repeating Joshua’s own words – they were solemnly, seriously, charging the man to tell the truth, because God is the witness.

All of us have secrets. I do, too – plenty of them. Most of them do not matter, as they are frivolous things. But why do secrets become secrets? Most often than not, it stems from a disparity between our inner and outer selves. If revealed, the outer self that we display to others – the image of ourselves that we’ve established in front of people will be affected. But there is always a slight disparity – and this disparity becomes huge, when the secrets we harbour in our hearts contain sins. Deeds we’ve done while we thought nobody was watching – who are we kidding? Deep in our own hearts, we know that God knows. Deep in our own hearts, we know that one day we’ll have to face up to what we have done. Let us start by confessing our sins to God, and in doing so, let us continue to honour and glorify our Lord.