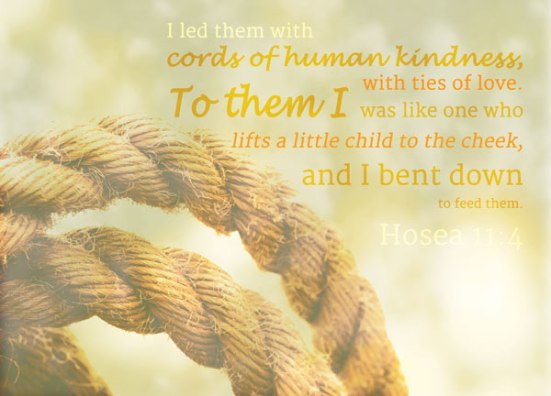 I led them with cords of human kindness, with ties of love. To them I was like one who lifts a little child to the cheek, and I bent down to feed them.

Hosea is not an easy read to me. Using metaphors after metaphors, on his personal life and family, on the nation and the tide of nation-wide issues, on social attitudes and the rejection of the Israelites – it is a hard read. Perhaps the one thing that most people remember about Hosea is how dramatic his personal life is – God actually asked him to marry a prostitute in order to illustrate the unfaithfulness of the Israelites to the Lord [Hosea 1:2]. Hosea preached during the reign of Jeroboam, and it was largely a time of stability and prosperity – the reign of Jeroboam was likely the most prosperous that Israel had, which led to a sense of arrogance and complacency, which Amos, a contemporary of Hosea, spoke out against in Amos 6. The message in Hosea takes on a unique line – while it is as harsh as most of the books of prophecies, there is a stronger emotional and compassionate tone in Hosea – the love and mercy of God stands out. In Hosea 11 we see the extent of God’s love, which continues despite the rebellion of Israel. In today’s study, we will examine the extent of God’s love in teaching and providing for his people, despite them not reciprocating.

I led them with cords of human kindness – there is a very strong sense of fatherly love here, as chapter 11 starts with the Lord calling Israel ‘my son‘ [Hosea 11:1]. Many other versions render this phrase as cords of man, and yet still several others do not mention the humanly or manly term at all. What to make of it? In Hosea 10:11 Ephraim is said to be a trained heifer – Ephraim and Samaria are other names used interchangeably with Israel in this book. A heifer is a young cow – cattle – unsurprising, because the Israelites were often referred to as sheep and cattle in the Bible. The Lord is also frequently referred to as the master of the flock, and hence leading the cattle would be as what we expect of him. However, the Lord leads his cattle not with the normal cords and ropes. He treats them with the kindness that one would show a man. He leads cattle with cords meant for men. What does this tell us? God’s fatherly love and indescribable compassion for his people.

with ties of love – I think we see it very clearly throughout the book of Hosea. For the longest time, the Lord dealt with the Israelites not by force, even though he obviously could. Instead, he repaid their unfaithfulness with his faithfulness; and their rebellion with his grace and love. It is these ropes that link the Israelites to God – it is only his love, that connects the people to him. Nothing else.

To them I was like one who lifts a little child to the cheek – now, this is really hard. Let us cross-reference some other versions of the Bible:

Apparently, most other versions refer to the metaphor of lifting the yoke of the jaw. With this understanding, let us go back to the NIV rendition – to them I was like one who lifts a little child to the cheek – it should make a lot more sense now. Referring back to the previous chapter, where Ephraim was likened to a heifer – Ephraim is a trained heifer that loves to thresh; so I will put a yoke on her fair neck. I will drive Ephraim, Judah must plow, and Jacob must break up the ground [Hosea 10:11]. We know that there is a yoke placed on the Israelites, metaphorically speaking – like many cattle were subjected to in the past. Yokes are heavy and usually tugs against their necks or their jaws so that they can pull the load behind them (often to plow). The Lord is like a kind father here, who lifts the yoke up to the cheek of the cow, so that the cow will not be so strained by it all the time and can rest and eat (next phrase) easily. While some versions suggests that the Lord took off the yoke, it should be noted that it most likely wasn’t the case – this isn’t like freeing the Israelites from the bondage of Egypt – a complete deliverance – but more of a breather, a humane act of kindness for the little child – as rendered in NIV, perhaps to emphasize that this is God, in his persona as the father of his people.

and I bent down to feed them – as continued from the previous phrase, as the yoke is relaxed and they could rest, as well as be unhindered in their eating. The verb here is perhaps that the Lord ‘bent down’. A loving act, if not humble. He didn’t just throw the food down. He gently, lovingly, bent down to feed his children. Many versions also suggest that it was meat that he fed them with – meat! Why would cattle eat meat? But this perhaps highlight the abundance of the Lord’s provision for his children.

This verse really shows the extent of how much God extended his hands to the Israelites, how much he called them, loved them, pampered them even. His love and mercy was extravagant, his guidance and his provision were abundant. And it was thus emphasized in verse 4, because in the next few verses, comes a strong chiding from the Lord on the rebellion of Israel. Coming after verse 4, it is obvious to the reader that the rebellious acts of the Israelites are even more so inexcusable.

What can we learn from this verse? It must be noted that this isn’t a command – we aren’t asked to guide people with cords of man and lift yokes off their jaws. That is in the realm of God’s love. But I think this verse gives us a hint of the nature of God’s leadership – a fatherly love, a love that will go up the mountains and down the seas, a love that will jump through hoops of fire and walk the extra mile. As we reflect upon how the Lord loved the Israelites, let us also understand that is the nature of the Lord’s love – and He loves us so abundantly as well. As we reflect upon how the Lord loves us, let us also learn to lead others with love and compassion.