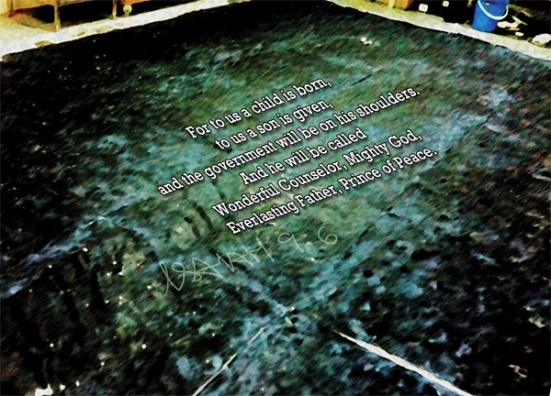 For to us a child is born,
to us a son is given,
and the government will be on his shoulders.
And he will be called
Wonderful Counselor, Mighty God,
Everlasting Father, Prince of Peace.

What is God to you? Who is Christ to you? This verse is almost universally accepted to be a prophecy about the Messiah, speaking about the birth of Christ and his identities. A small number of writers will disagree and suggest the ‘he’ of this verse refers to Hezekiah, who was already born when this prophecy was given out. Indeed, the present tense is used in this verse in the first part of this verse – a child is born – and yet Christ was only born several hundred years after this prophecy was made. In this study we will address these concerns, and also look briefly into each of the terms and titles used to describe the Messiah.

For – prior to this verse Isaiah was proclaiming victories which were far greater than the context that Israel – or more specifically, the Kingdom of Judah – was in at that point. Isaiah was speaking about the greatest victory, a victory of the entire humanity, where salvation is received and the people are delivered from their distress. [Isaiah 9:1-7] The first verse in older texts (or perhaps Hebrew texts) is labelled under Chapter 8, and we see a clear connection between the two chapters as darkness turns into light through the Messiah. Nevertheless, there will be no more gloom for those who were in distress. In the past he humbled the land of Zebulun and the land of Naphtali, but in the future he will honor Galilee of the nations, by the Way of the Sea, beyond the Jordan [Isaiah 9:1].

To us a child is born, to us a son is given – the terms ‘child’ and ‘son’ do not differ much from each other with how they were used in this context – son here doesn’t quite mean the son of anybody – but son here really just suggests a child. Although, indeed, Christ is the Son of God, and has been referred to as the Son of Man as well. Do you ever wonder if the prophets know what they were talking about when they prophesy about the visions that God has shown them? I sometimes do wonder. In retrospect we today know that indeed The Messiah came to us as flesh, born of human, grew up as a child. If Isaiah saw a vision, it would likely have been that. The child was born of a human, but more importantly he was given to us by God. Salvation, which Jesus represents, is a gift to us, for free, because Christ paid the price for us.

Yet the issue here is the present tense that was used. If you would note, the subsequent lines are in future tense. Was it a mistake? Or was the child that Isaiah spoke of not Jesus? There can be no doubt that Jesus wasn’t born in Isaiah’s time. There were perhaps 700 or more years in between them. Some (though not many) scholars believe that the child could possibly be Hezekiah – one of the more prominent and God-fearing kings of Judah – indeed one of the rare few kings to be highly praised in the Bible – Hezekiah trusted in the Lord, the God of Israel. There was no one like him among all the kings of Judah, either before him or after him [2 Kings 18:5]. Very high praise indeed. He was likely young enough to be considered a child at the point of this prophesy, and he was certainly a blessing to his people, for he was the one whom swept the entire kingdom of Judah clean of foreign idol worship and turned the nation back to God.  I’m sure not many people will argue if we were to say that he was, as man and as king, a gift to his people. Yet while he changed the state of Judah during his reign, he didn’t exactly deliver the people from distress, nor were his victories a salvation of humanity. The major crisis of the Kingdom of Judah during his reign was really down to the Battle with King Sennacherib of Assyria, where an angel of God killed 185,000 Assyrian soldiers in a single night [2 Kings 19:35], hence saving Hezekiah and his people from their distress. He did indeed become king – with the government on his shoulders, but that’s perhaps as far as we can argue his case. Wonderful Counsellor? Mighty God? Everlasting Father? Prince of Peace? Not to discredit King Hezekiah for his deeds, but the only one who fits the bill entirely can only be Jesus.

The government will be on his shoulders – in other words, he will be King. Hence on the present tense is abandoned and the future tense is used. Notice that from God to the world, present tense is used – unto us a child is born, unto us a son is born – but for the things in this world, things that have yet to unfold, future tense is used. Does this mean that there are doubts that the government will be placed on his shoulders? No, I think it’s more of a homage to God’s greatness than it is to doubt the matters that have yet to unravel that are of the world. Our Lord is no normal king – I will place on his shoulderthe key to the house of David;what he opens no one can shut, and what he shuts no one can open [Isa 22:22].

Wonderful Counsellor – Some scholars read this phrase together, some analyse it as two different qualities – whichever way you prefer, I think it’s all good, because although this verse gives us a great many terms and titles that depict several qualities of the Messiah, we should know that it is in no way exhaustive – the Messiah is far greater than these few roles and qualities. Wonderful, as an adjective, is rather frequently used in the Bible, although used in various forms, and often translated differently. It is most often used to extol God and to describe miracles. In 1 Peter 2:9, seemingly an opposite of this verse as in it’s about our identities rather than that of Christ, the term wonderful light is used as well [1 Peter 2:9|Article]. What are miracles? Things that happen unexpectedly? Things that defy human logic? Things that have so low a chance of happening that we daren’t even hope? – yes, that’s the first coming of Christ. Wonderful. And he is our Counsellor – doubt not his wisdom and his guidance. Doubt not his commands and the instructions of his disciples, who imitate him. Together, what do you get? A great, miraculous advisor [Isaiah 28:29].

Mighty God – he is God. He is human and God at the same time – not 50% human 50% god, but fully human and fully god in his 33 years of ministry and life here on earth. Christ is God – one of the three persons of the trinity, and while we often avoid calling him ‘God’ so as not to confuse the person of the Son with the person of the Father, he is God, and he has the same qualities. Almighty God. Omnipotent. Omniscient. Omnipresent. Omnibenevolent. And because he is mighty, he is able to empower us. He is able to renew our strength.

Everlasting Father – The concept of the Trinity is often confusing – I must confess that at times I tend to stumble on it as well. We are told that the Lord our God, The Lord is one [Deu 6:4|Article], and I discussed a little about the concept of the Holy Trinity and hence shall not dive into that massive topic today. In Christianity, in general, when we speak of the Father, we mean the godhead, God the Father himself, God who sent his Christ his son to us. Yet there is only one God, and each member of the trinity are but just three persons of the same God. Okay, I said I won’t dive too much into it, but I hope I don’t confuse you. Jesus himself has referred to God as ‘Father’ numerous times in the Bible, and when we call Christ Everlasting Father, we are essentially doing two things. Firstly is to address the three persons of the Trinity as one, and secondly is to recognise that Jesus Christ is the beginning of the gospel, the beginning of the Church, the father of Christianity. Well if you are confused, or if I am not very clear, then let’s just focus on ‘everlasting’. That’s easier. God is eternal. And yet in his eternity he is constant and unchanging.

Prince of Peace – at the end of the day, the greatest peace comes from our Lord – And the peace of God, which transcends all understanding,will guard your hearts and your minds in Christ Jesus [Phil 4:7|Article]. It’s a peace of the heart, the soul, the mind, the body. It’s a peace from the inside out. Or so I think, but I’m sure we’ve yet to truly experience the extents of this peace, because perhaps, there are no limit to this peace. You may feel like you have peace today, but be prepared to be even more so at peace another day. Many things will wreck our peace in this world – everything else apart from God seems to serve to disturb our peace. But he is peace. He grants peace. He grants rest. Just turn back to him. For he is the Prince of Peace, indeed, for he himself is our peace, who has made the two groups one and has destroyed the barrier, the dividing wall of hostility [Eph 2:14].

Isaiah is probably the greatest Messianic prophet in the Bible. It never fails to amaze me how convicted he was when he prophesied about the Messiah. I wonder if I lived in his time, would I think he was crazy? I’m blessed to be born at a time much later, when the prophesy has already been fulfilled. So are you.