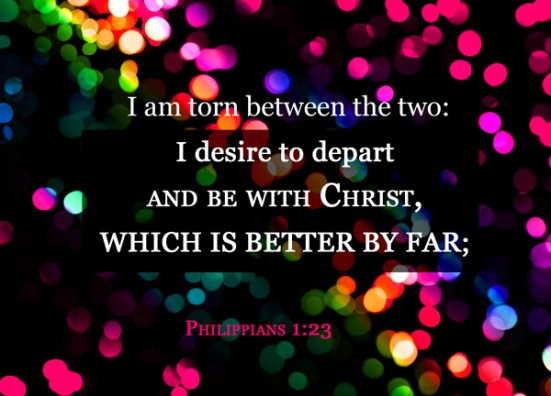 I am torn between the two: I desire to depart and be with Christ, which is better by far;

The book of Philippians is one of the 4 prison letters written by Paul, written to the Church of Philippi to comfort them at a time when he was imprisoned and many Christians were in anxiety over his plight. The main theme of the book was certainly joy – we see the emphasis on a joyful heart throughout the book, which can be summarised by Philippians 4:4 – Rejoice in the Lord always. I will say it again: Rejoice! [Phil 4:4|Article]. Paul begins the book of Philippians by giving thanks for them, highlighting the fact that they were a source of great joy to him – In all my prayers for all of you, I always pray with joy because of your partnership in the gospel from the first day until now, being confident of this, that he who began a good work in you will carry it on to completion until the day of Christ Jesus [Phil 1:4-6]. He then proceeds to explain his attitude regarding the persecution that he faces, the death that is staring at him in the face, and the purpose of life that keeps him going. In verses 23-24, we see especially the dilemma of Paul – he has no fears or qualms about death, for he sees it as a time to be with Christ, but at the same time, he knows that he still has a role to serve in his capacity as an apostle by living. In this study, we will focus on the first of Paul’s heart – on death – and ponder about Paul’s declaration that death is a situation that is better by far.

I am torn between the two – it is always interesting to note what tears people up – especially for men as strong, as focused, as disciplined and unwavering as Paul – what are the things that causes him to have a dilemma? It may seem like not much of a dilemma in this verse and the next, but if you look at the preceding verse, Paul sighs, “Yet what shall I choose? I do not know!” [Phil 1:22]. Do we know what are the two things? Yes, he mentions this earlier as well – I eagerly expect and hope that I will in no way be ashamed, but will have sufficient courage so that now as always Christ will be exalted in my body, whether by life or by death. For to me, to live is Christ and to die is gain [Phil 1:20-21].

I desire to depart and be with Christ – this refers to the part on death, which is the only one we’ll be looking at in this study. When Paul says I desire to depart – he doesn’t mean that he desires to die or kill himself – it should not be perceived as a suicidal kind of thing. Even though this entire passage presents a dilemma of Paul’s regarding life or death, he does not ponder about it so that he can do something about it (like killing himself) after thinking about which is better. No – essentially this is merely a sharing of the depths of his intense emotions for Christ, and a manifestation of all that experience of ministry that culminated in him a desire to be with Christ, to be in the presence of Christ. It is not so much about death itself than it is about being with Christ, whom he loves.

which is better by far – I love the Chinese rendering of this phrase – it sounds something like ‘how incomparably good it is!’ Remember, the two things that Paul compared are life and death, but again, the pure, simple motive behind his preference for death is nothing dark at all – in other words, this comparison can be said to be dying to be with Christ > living and serving the people – i.e. being with Christ > serving the people. Of course, in his personal walk with God the desire to be with Christ should far outweigh his desire to serve others – that should perhaps be the case for all of us, but in the bigger picture, for the sake of others and for the sake of God’s kingdom, Paul knows that to continue living and to continue to have the chance to serve others is even more important.

He doesn’t mince his words though. If we’re talking about which is better, being with Christ is far, far better, even if it means death.

Paul was an exceptional man who lived in an exceptional time. He faced desperate situations, and his view on death may not be something all of us can easily adopt – we’re perhaps not so noble. Yet, if we could see being with Christ something that is better than anything else in the world that we possess or we enjoy, then we’re perhaps on the right track. If we can have even just half of Paul’s desire to be with Christ, half of his belief in the joy and peace that he would attain by being with the Lord, then perhaps death  won’t be as difficult to accept as it is now. As Christians, we believe in eternal life, and the very source of hope in this eternal life is really, Christ Jesus.