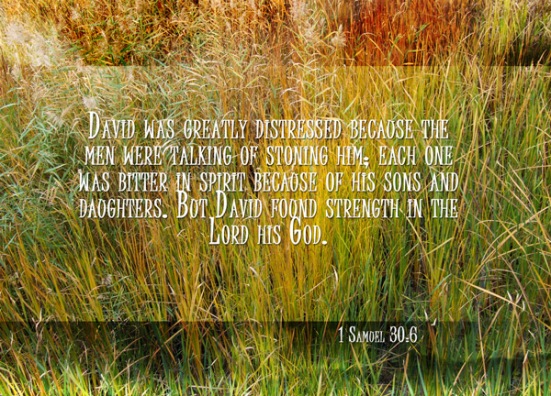 David was greatly distressed because the men were talking of stoning him; each one was bitter in spirit because of his sons and daughters. But David found strength in the Lord his God.

David had left Saul, who was fearful of him and had time and time again been trying to kill him. David went to fight for the Philistine with his men, but after some time the Philistine commanders, knowing that he was an officer of Saul and fearing him for that, sent him home. While David and his army were away from home in the battlefield, the Amalekites attacked their city  Ziklag where David’s family – and the families of his soldiers were living in. The enemy burnt the city and captured their wives and their children. Imagine you are a soldier fighting a war with David far away from home, and when you returned home, your city has been raided and your families captured away. How would you feel? Would you still fight for David? Would you still respect David? No, you wouldn’t, and you can’t turn back time to fend off the Amalekites. There are probably no-one where you are at to allow you to vent your bitterness and frustration. Oh wait, there’s the man who was leading you. There’s David. It must be his fault. His incompetency has led him to have to flee from Saul and going to the Philistine, bring the abled men away from the city and hence placed into the easy hands of the Amalekites. Your bitterness, having no-one else to turn to, raged against David. The men began to talk about stoning him – that would be almost like a huge act of regicide, except that David wasn’t officially king yet. While the bitterness of their plight caused his men to turn against their own leader, David turned his emotions – both being targeted by his own men and the news of the attack of their city – God’s way. Instead of being bitter and turning against his own people, he turned to God, and in God, found strength. In this study we will examine the King as a case study of how God is a never-depleting source of strength for us – in good times and in bad.

David was greatly distressed – as he should be, for sure. Just as his men were upset over the enemy’s invasion of their city and their treachery, so too would David. Just as his men had families and friends back at home, so too, did David – his two wives were specifically mentioned to have been captured David perhaps would have more at stake back at home than any of his men. Just this piece of news alone would have been enough trouble for David. Yet he had more concerns than his men. While his men could target their bitterness and rage at David, who was their leader and thus naturally the scapegoat of their frustrations, David hadnot. There was no one David could snap at or point a finger at. There was no superior or leader who was above David whom he could hide behind and shirk his responsibilities to. He had no-one to turn to, no man to consult regarding their home city, no man to seek help from regarding his bitter and angry followers. He had to fend for himself and he had great reasons to be in distress.

because the men were talking of stoning him – the men were angry and bitter, clearly the result of their frustration of being unable to do anything at a time when their families needed them. They weren’t even discreet when they plotted to vent their frustrations at their leader – he heard them. David knew about their intentions. They weren’t even talking about abandoning David, they weren’t even just badmouthing David – they were talking about killing him, and not by their swords or weapons, but by stoning him. It would be a method that allows them to slowly kill him, a method that allows them to truly vent out their frustrations. Stoning in those days represented a treatment to somebody who was a criminal or somebody who was rejected and despised by the society. At this moment, David had fallen from the heights of his supposed greatness as the new king anointed by Samuel and has become regarded as a lowly criminal and outcast.

each one was bitter in spirit because of his sons and daughters – every single one of his men was affected. Everybody was worried and bitter because their children at home were in danger, or most likely already hurt or dead. It is easy for us to turn bitter in spirit whenever unexpected things happen. If we do not guard our hearts well, we will stumble, and when we stumble, the things that we begin to think about doing will not only be irrational, but also sinful.

But David found strength in the Lord his God – David was in a situation that was doubly distressing, and with his life yet again in danger and his authority as leader being threatened – in a circumstance like this, David somehow found strength in the Lord. His God, his personal God. This is perhaps key – having a personal relationship with God in good times will enable you to be able to draw strength from God even in bad times. We mentioned that there was no man for David to turn to. His men had all turned against him in bitterness – but God was still with him, and David turned to God for strength.

When David turned to the Lord, the Lord empowered him and opened a way out for him. Eventually, David recovered everything the Amalekites had taken, including his own family and the families of his men. When we turn to God instead of men, we will find a source of strength that will never be depleted and will always empower. David was able to turn to God because he always had a relationship with the Lord, and that relationship was strong enough to tide him through even in bad times. Eventually, David went from strength to strength and became a great king. He could have died in this incident ignobly, stoned to death by his men. If he had made a different decision, if he had a different reaction to the threats of his men, for example, if he had not turned to the Lord for strength but instead confronted his men and fought them, he could have been dead, and all the glory and greatness that he would accomplish later on as king would never have happened. God if a never-depleting source of strength for us, and empowers us from strength to strength.